Homelessness Among Veterans Has Fallen, But Many Still Need Help

| By Will Fischer
Homelessness among the nation’s veterans has fallen 23 percent between 2009 and 2013, according to new data released this week (see chart).  Federal rental assistance appears to have played a central role in the improvement, but affordable housing remains out of reach for many veterans, as we explained in a recent paper.  And without an increase in funding for housing vouchers, assistance for as many as 12,000 veterans could be in jeopardy.
Image 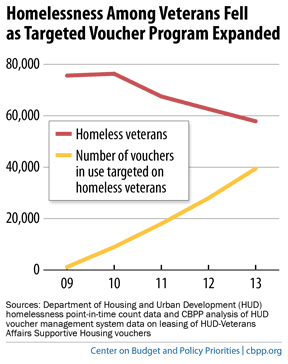 The Obama Administration and Congress have increased efforts to aid low-income veterans.  The Administration set a goal in 2009 of ending homelessness among veterans by 2015, and Congress has funded steady increases in the number of vouchers available through a program (HUD-VASH) jointly administered by the departments of Veterans Affairs and Housing and Urban Development.  That program now helps more than 40,000 veterans afford decent, stable homes, and “mainstream” rental assistance programs that are not specifically targeted on veterans help nearly 300,000 more — the great majority of them poor or near poor. Research suggests that this assistance contributed to the gains reported this week.  Studies have found that rental assistance sharply reduces homelessness, indicating that a significant share of assisted veterans may have been homeless without assistance. Despite the recent progress, rental assistance reaches only a fraction of veterans in need.  A HUD assessment on one night in January 2013 counted 57,800 homeless veterans, and many others struggle to afford housing.  In 2012, 1.79 million low-income veterans lived in households that paid more than 30 percent of their income for rent and utilities, and 762,000 lived in households that paid more than 50 percent. Unfortunately, funding for rental assistance programs that can help veterans meet their housing needs is under considerable pressure.  Sequestration cut 2013 voucher funding, so fewer low-income families are receiving assistance.  Cuts in assistance will grow more severe in 2014 unless Congress raises funding above the 2013 level:  rising rents will push up program costs, and many agencies that used reserve funds to avoid harsh cuts in 2013 will exhaust them.  If Congress holds 2014 voucher funding at the 2013 level, 8,000 to 12,000 more low-income veterans will be left unassisted as a result. As policymakers negotiate the budget for fiscal year 2014, they should reflect on these veterans’ service to the country and the progress that’s been made in helping them afford housing.  They shouldn’t cut the programs that help them keep a roof over their heads.
Related Posts:
Topics:
Housing, Funding, Housing Vouchers

Share
Facebook Twitter Print Email
PreviousWho’s to Blame for the Slow Economy?
NextIn Case You Missed It...
Stay up to date
Receive the latest news and reports from the Center