State cuts to higher education have led colleges and universities to make deep cuts to educational or other services, hike tuition sharply, or both, as we explain in our recently released paper.  These tuition increases are hitting low-income students particularly hard, lessening their choices of schools, adding to their debt burdens — and likely deterring some from enrolling in school altogether. Annual published tuition — the “sticker price” — at four-year public colleges has risen by $1,936, or 28 percent, since the 2007-08 school year, after adjusting for inflation.  This has accelerated longer-term trends of reducing college affordability and shifting costs from states to students.  These trends have exacerbated struggles for students from low-income families, in several ways. Tuition increases are likely deterring low-income students, in particular, from enrolling.  College cost increases have the biggest impact on students from low-income families, research suggests.  Pronounced gaps in college enrollment among higher- and lower-income youth already exist, even among prospective students of similar ability (see chart).  Rapidly rising costs at public colleges and universities may widen these gaps further.
Image 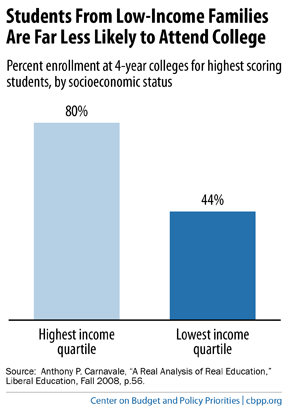 Tuition increases may be pushing lower-income students toward less-selective schools, reducing their future earnings.  Perhaps just as important as a student’s decision to enroll in college is the choice of which school to attend.  Even here, financial constraints and concerns about cost push lower-income students to narrow their list of potential schools and ultimately enroll in less-selective institutions, the research shows.  That choice has long-lasting effects, as disadvantaged and minority students who attend elite colleges make more than their counterparts who attend less-selective schools. Higher overall costs mean higher post-graduate debt levels.  Federal financial aid also has risen in the last several years, helping many low-income students cover much of the cost of recent tuition hikes.  The overall cost of attending college has risen for these students, however, because room and board costs have increased, too.  As a result, the net cost of attendance at four-year public institutions for low-income students increased 12 percent from 2008 to 2012, after adjusting for inflation.  And this means that low-income students are  borrowing more.  In 2008, the median debt level for a low-income student graduating from a public four-year university was just under $17,600.  By 2012, that number had increased 17 percent to nearly $20,700.
Related Posts:
Topics:
Poverty and Inequality, State Budget and Tax
PreviousFive Things Wrong With the House Bill to Fund Housing Assistance
NextThe Problems With the House Approach to Tax Extenders
Stay up to date
Receive the latest news and reports from the Center