Hardship in America, 2013: Getting By Has Gotten Tougher

As Thanksgiving approaches, we’re taking a closer look at the hardships that many American families face in the weak economy, the programs that help them make ends meet and promote opportunity, and the threats that these programs are encountering.  In this first post in the series, we look at the tough time families are having simply making ends meet.

Almost 1 in 5 American families struggled to meet one or more of nine basic needs in 2011, the Census Bureau reported earlier this year.  These included difficulty meeting essential expenses, not paying rent or mortgage, getting evicted, not paying utilities, having utilities or phone service cut off, not seeing a doctor or dentist when needed, or not always having enough food.  Several of these measures of financial difficulty worsened between 2005 and 2011, according to the Census data.

“The number of American households that could not meet basic expenses increased by 16 percent (from 16.4 million to 19.1 million) from 2005 to 2011.  During that same period, the number unable to pay their rent or mortgage increased by 39 percent,” Census writes.  (The total number of U.S. households rose by 4 percent over the same period, Census data show.) 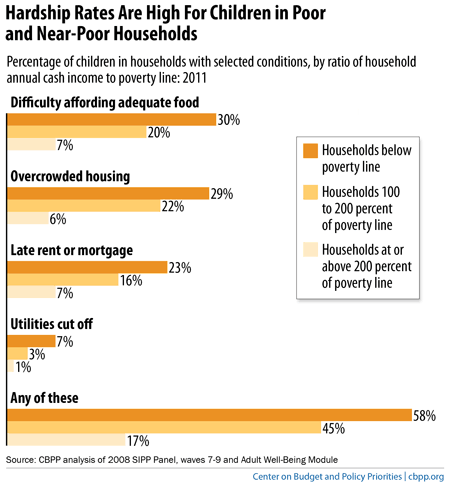 In 2011, 36 percent of the poorest fifth of U.S. households experienced one or more hardships in fulfilling their basic needs in the previous 12 months.  (The poorest fifth tends to overlap closely with the population in poverty.)

Many poor children live in households that struggle to meet basic needs.  More than half (58 percent) of poor children lived in households that experienced at least one of four hardships — “low food security” (problems affording adequate food), overcrowded housing, falling behind on rent or mortgage, or having utilities cut off — and close to half of children in near-poor families faced such hardships, too (see chart).  This is especially troubling in light of growing evidence that young children whose families struggle to afford the basics may be exposed to high levels of stress that can hinder healthy brain development and future academic achievement.

These findings show the importance of programs like SNAP (the Supplemental Nutrition Assistance Program, formerly food stamps), unemployment insurance, and housing assistance in helping American families — and yet, those programs are facing funding threats that would lessen their reach and leave more families hurting, while the economy continues to struggle to recover.

We’ll cover the important roles that those programs play for people facing hardship, and the threats they face, in future posts.