| By Danilo Trisi
The Supplemental Nutrition Assistance Program (SNAP, formerly known as food stamps) and Unemployment Insurance (UI) — two programs facing deep cuts — lifted millions of people above the poverty line in 2012, according to a CBPP analysis of Census Bureau data released today (see chart). Our analysis using the Census Bureau’s Supplemental Poverty Measure (SPM), which accounts for taxes and non-cash government benefits, shows that all public programs lifted 41 million people out of poverty in 2012, including almost 9 million children.  (Like the SPM poverty rate, these numbers are little changed from 2011.) These findings come as Congress considers the future of both SNAP and UI — and they show the critical role that both programs play in reducing financial hardship. SNAP’s food assistance benefits kept 4.9 million people above the SPM poverty line, including 2.2 million children. Today’s analysis also showed that SNAP is particularly effective at keeping children out of the deepest or most severe poverty:  in 2012, SNAP lifted more children — 1.4 million — above half of the poverty line than any other program.  Despite this track record, both the House and Senate have passed legislation to cut SNAP, and a House-Senate conference committee is currently negotiating a final bill.  These cuts would make things harder for tens of millions of Americans who already struggle to put food on their tables — and they’d come on top of a cut in SNAP benefits that began last Friday for all 48 million SNAP recipients as a temporary boost to the program ended. UI kept 2.5 million people, including 600,000 children, above the SPM poverty line in 2012. But, federal long-term UI benefits provided through the Emergency Unemployment Compensation program will disappear at the end of December, unless Congress acts to keep it running.  This UI cut would come on top of UI reductions that have already occurred since 2010 — cuts that have already weakened the program’s effectiveness in fighting poverty, as we’ve explained.  In fact, the new SPM data show that the number of people that UI kept out of poverty has fallen by half (48 percent) since 2010 — far more than the 16 percent drop in the number of unemployed workers.  Letting Emergency Unemployment Compensation expire at the end of the December would further slow the recovery and cause hardship for workers still struggling to find jobs.
Image 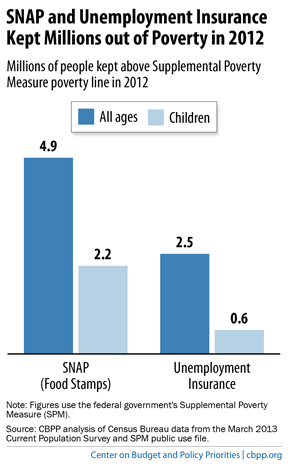 We’ll be back with more SPM findings later today.

Share
Facebook Twitter Print Email
PreviousEverything You Need to Know About the Budget Talks, in 11 Charts
NextPoverty Rate Would Have Been Nearly Twice as High in 2012 Without Safety Net, New Census Data Show
Stay up to date
Receive the latest news and reports from the Center