Social Security marks its 77th birthday today.  This highly successful program pays benefits to 56 million Americans.  It’s the single most important source of income for its elderly beneficiaries, contributing on average two-thirds of income for recipients over age 65.  For more than one-third of them, Social Security constitutes 90 percent or more of income.  Reliance on Social Security is especially high among the oldest old — those who can no longer work and may have outlived their savings — and elderly blacks and Hispanics.  Without Social Security, nearly half of elderly Americans would live below the official poverty level; instead, fewer than 10 percent do (see graph).
Image 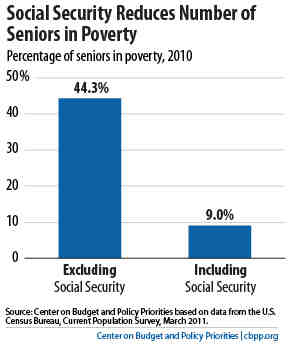 But Social Security isn’t just for the elderly.  It protects workers who suffer a severe medical impairment, and children whose breadwinner dies, retires, or becomes disabled.  We estimate that in 2010 — the latest year for which we have data — it lifted 20 million Americans of all ages above the official poverty line (see table).
Image

Social Security benefits are modest.  Retired workers and elderly widows collect an average of $1,200 a month, and disabled workers even less.  Nobody gets rich from Social Security:  only 7 percent of retired workers get more than $2,000 a month (and a minuscule 0.5 percent get more than $2,500).  Social Security benefits are low by international standards, too. With the continued decline of the traditional defined-benefit pension, Social Security is the only retirement income most Americans will collect that’s indexed to inflation and guaranteed to last as long as they live.  And because it’s not means-tested, Social Security encourages people to supplement their retirement income by working part-time or by saving money. Social Security faces a long-term shortfall that’s predictable and manageable.  (In fact, the shortfall is only slightly bigger than the cost of extending the Bush tax cuts for the richest Americans.)  Those who fear that Social Security won't be around when today's young workers retire misunderstand the trustees' projections.  Even if policymakers did nothing, the program could still pay three-quarters of scheduled benefits after the trust funds run out in 2033. Of course, policymakers should act well before then to place this popular program on sound long-term footing.  The best proposals would protect vulnerable workers and beneficiaries and give all participants ample notice of future changes to this vital program. (For our salute to Social Security on its 75th birthday in 2010, see
here
.)
Related Posts:
Topics:
Social Security
PreviousRyan Roundup: Everything You Need to Know About Chairman Ryan's Budget
NextHealth Reform Strengthens Medicare, Doesn’t “Rob” It
Stay up to date
Receive the latest news and reports from the Center