Health insurance for women improves both their own health and that of their children, research shows.  Yet, low-income women living in the 21 states that have not expanded Medicaid as part of health reform face glaring gaps in access to health coverage.  In these states, 1.8 million uninsured non-elderly women are caught in a “coverage gap,” with incomes too high for Medicaid but too low for subsidies to help purchase coverage in the marketplace. 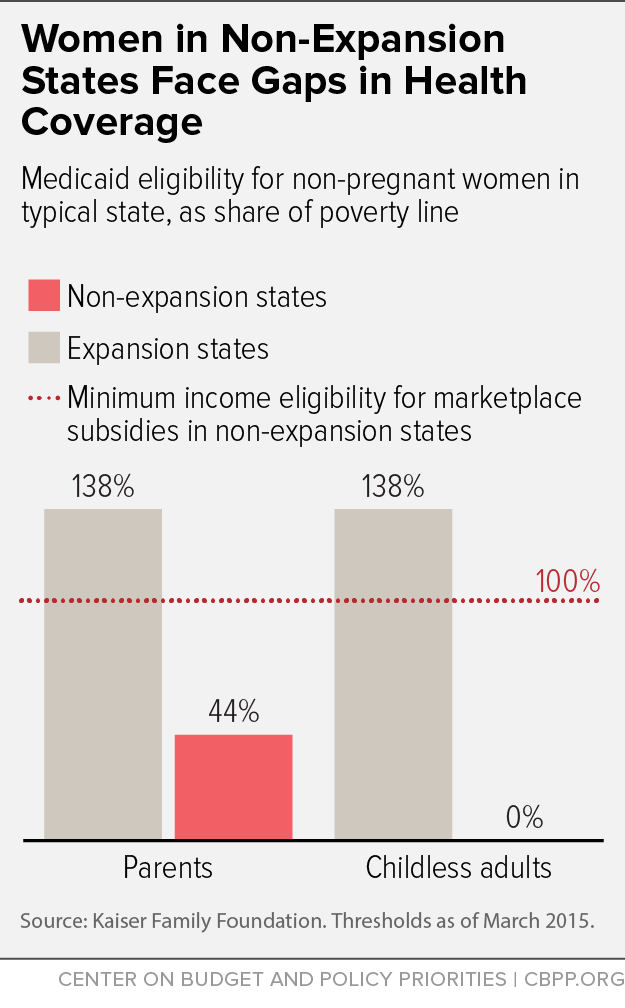 Health reform greatly expanded women’s potential access to health coverage, but that depends on whether a state has expanded Medicaid.  In expansion states, women with incomes below 138 percent of the poverty line (about $27,000 a year for a family of three) can get coverage through Medicaid, while those with higher incomes can get subsidies to purchase coverage in the marketplace.

When women have access to continuous coverage — before becoming pregnant and between pregnancies — they are healthier during pregnancy, and their babies are likelier to be healthy at birth, research shows.  Health coverage before pregnancy allows women to receive preventive care like regular doctor’s visits, tobacco cessation programs, and substance abuse services that help ensure their babies are born healthy.

And health coverage including access to treatment for diabetes and hypertension, depression, and stress, and other forms of parental support between pregnancies improves women’s outcomes in subsequent pregnancies.  Studies also show that when low-income parents have health coverage, they’re far likelier to enroll their children in the Medicaid or Children’s Health Insurance Program (CHIP) coverage for which they qualify.

This Mother’s Day, state policymakers can do right by women and their children by expanding Medicaid.

Coverage Gap Widening Between Medicaid Expansion States and Others

September 18, 2014
PreviousA State-by-State Look at Federal Rental Assistance
NextHonoring Mothers by Helping Them Feed Their Children
Stay up to date
Receive the latest news and reports from the Center