The “wait and see” approach that Senator John Thune and some other Republicans recommend for providing more state and local fiscal relief is highly unwise. States and localities furloughed or laid off nearly a million workers last month, new data indicate, and reports of more furloughs this month are widespread. Policymakers must provide the relief now — before states start eliminating these and other jobs permanently in the next few weeks to balance their budgets for the coming fiscal year, which will begin on July 1 in most states, making the economic downturn deeper and longer lasting.

In just one month, states and localities furloughed or laid off more workers, 981,000, than all of the 750,000 in the aftermath of the Great Recession of a decade ago. (See chart.) 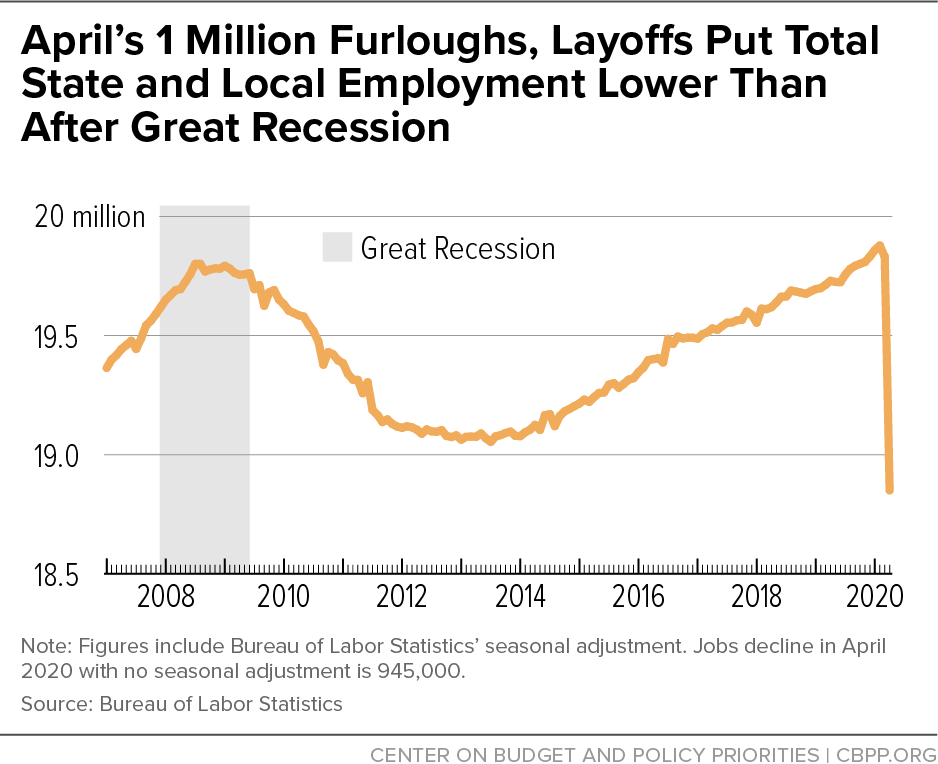 The vast majority of these losses were furloughs, so some of those affected could return to work once schools, parks, and other state and local services reopen. But state and local lawmakers will likely eliminate many of these jobs — and others — unless the federal government provides substantial fiscal relief. That’s because the pandemic has caused state and local revenues to collapse and costs to soar, fueling a historic fiscal crisis that’s much worse than the worst years of the Great Recession.

We project that states alone will face shortfalls totaling $650 billion in the current, upcoming, and subsequent fiscal years, not including the significant new costs associated with the pandemic. Localities will also face huge challenges. Even after accounting for the modest amount of flexible federal aid provided so far and all of the money that states have in rainy day funds, that still leaves states with shortfalls of about $510 billion.

Already, states and localities are beginning to impose cuts that will lead to permanent layoffs. Ohio Governor Mike DeWine, for example, announced plans to cut $300 million in K-12 funding and $100 million in college and university funding for the current year. Georgia’s top budget officials told the state’s schools to plan for large cuts next year that will almost certainly force districts to lay off teachers and other workers. And California Governor Gavin Newsom is calling for a $10 billion cut in school funding, which will also likely generate layoffs and other steep cuts. It’s no wonder the bipartisan National Governors Association is calling for much more federal fiscal relief.

After states imposed stay-at-home orders starting in March, many school districts, public universities, state agencies, and local departments furloughed employees who weren’t immediately needed — for example, school workers who were not directly involved in distance learning, parks and recreation employees, college campus staff, and elective medical care workers. New York City furloughed all of its school bus drivers; Jackson County, Arkansas furloughed dozens of employees; Cincinnati furloughed 20 percent of its workforce, including workers in the health, water, and finance departments; an Idaho school district furloughed half its employees; and the University of Oregon furloughed about 280 employees. Nearly half (469,000) of workers furloughed or laid off in April were school employees.

Significant furloughs have continued into this month. Nearly a thousand fire department employees have been furloughed or laid off, with as many as 30,000 such job losses projected for this year and next. Dallas is furloughing 500 workers, mostly park and library workers, Milwaukee County is furloughing more than 700, and Houston may furlough about 3,000. Other state and local governments are imposing episodic furloughs, effectively reducing the hours — and pay — of thousands of workers. Workers with reduced pay don’t count among the nearly 1 million state and local workers furloughed or laid off last month, but those workers and their families and communities will feel the impact.

Because states and localities must balance their budgets each year, they will be forced in the next few weeks to lay off workers and cut spending in other ways or raise taxes by very large amounts. Such steps would turn furloughs into permanent job losses and make a terrible economy even worse. The federal government can stop that from happening, but only if it soon provides substantial fiscal relief to states and localities. Now is not the time to “wait and see” how bad things will get. That’s like waiting to pull the switch until after the train wreck.

May 12, 2020
PreviousProtecting Against Separate and Unequal K-12 Funding Amid COVID-19
NextIn Case You Missed It...
Stay up to date
Receive the latest news and reports from the Center