Families With Children Gained in 2013, But Poverty Still Higher and Incomes Lower Than Pre-Recession

The child poverty rate fell from 21.8 percent in 2012 to 19.9 percent in 2013 in the first statistically significant one-year drop in child poverty since 2000, according to new data released by the Census Bureau today.  While the poverty rate among children remained well above the 2000 level, when it was 16.2 percent, the improvement in 2013 is welcome news that the economic recovery has finally begun to improve the circumstances of the lowest-income children. 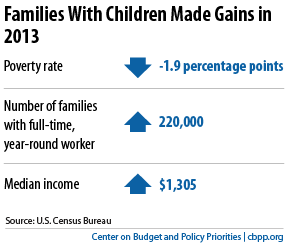 This improving employment picture for parents also translated into an increase in median income among families with children.  The median income for these families rose from $60,856 in 2012 to $62,161 in 2013 (all adjusted for inflation).  This is a welcome improvement, but median income among these families remains well below its 2007 level of $66,494 and even further behind its peak of $68,580 in 2000.  Between 2000 and 2013, the family with children right in the middle of the income distribution lost $6,400 in income.

Improvements in 2013 were particularly large among Latino families with children, but the Great Recession had been particularly harsh for these families as well.  Poverty among Hispanic children rose markedly from 26.9 percent in 2006 to 34.9 percent in 2010, an 8 percentage-point increase.  Since 2010, the situation has improved.  Poverty fell to 33.8 percent in 2012 and then to 30.4 percent in 2013, and now stands 4.5 percentage points below the 2010 level.  Today’s data show that the recovery is making a significant dent in Hispanic child poverty as the employment rates and earnings of Latino parents rebound.

September 16, 2014
PreviousNew CDC Figures Show Health Coverage Gains in the First Quarter of 2014
NextGreenstein on Today’s Census Figures
Stay up to date
Receive the latest news and reports from the Center