“Every major deficit reduction plan over the last 30 years has been tied to the debt limit,” House Speaker John Boehner claims.  But that’s wrong in two ways.  Fewer than half of the deficit-reduction plans included debt-limit increases, and none did what congressional Republicans are trying to do now:  force a President to accept policies that he deeply opposes by attaching them to a needed debt-limit increase — and raise the real risk of a government default if he refuses to go along. Thus, in his linkage of deficit reduction and the debt limit, Speaker Boehner gets it backwards. The heart of the current Republican debt-limit strategy is to force the President to accept their proposals, which reportedly may include such items as a one-year delay in health reform, cuts in some entitlements, and approval of the Keystone XL oil pipeline.  Yet the evidence shows that Congress hasn’t used the debt limit to extort presidential concessions in a deficit-reduction package.  Rather, it was the debt limit that hitched a ride on a bipartisan deficit agreement.
Image 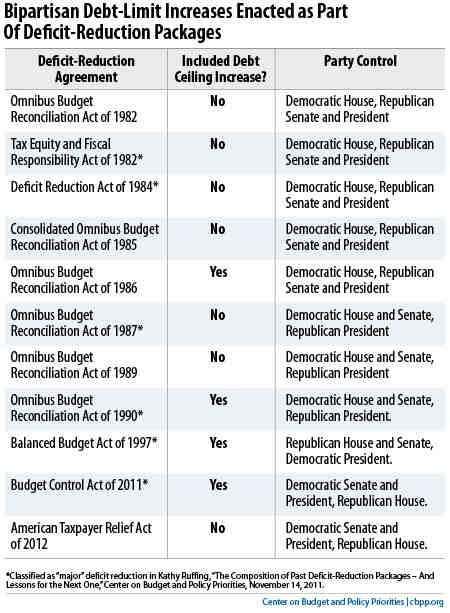