Economy Growing—But Much Too Slowly

Today’s initial Commerce Department estimate of economic growth in the fourth quarter of 2011 looks good at first:  the economy expanded at an annual rate of 2.8 percent, up from 1.8 percent in the third quarter.  That’s the tenth straight quarter of growth.  But a closer look at the numbers shows much that should concern us. 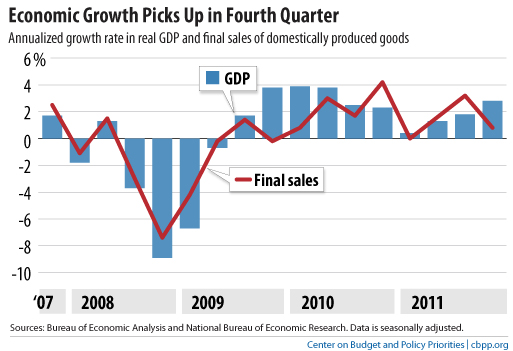 Critically, the jump during the third quarter in final sales of goods and services— a better measure of underlying demand than GDP —didn’t continue in the fourth quarter (see first chart).  More than half of the growth in GDP in the fourth quarter came from inventory accumulation — that is, unsold goods piling up on the shelves.

Also, the fourth quarter’s 2.8 percent growth was a bit slower than analysts were forecasting and the economy continues to operate well below full capacity.  Actual GDP is a gaping 6.7 percent less than potential GDP, or what the economy is capable of producing with full utilization of workers and business capacity (see second chart). 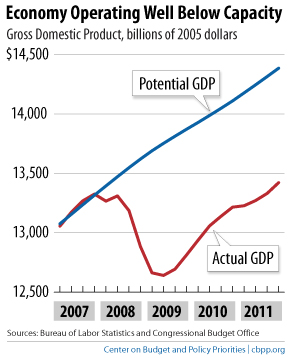 While inventory accumulation and consumer spending sustained growth in the fourth quarter, business investment in factories, offices, machines, and software slowed sharply.   A rise in the consumption of imports relative to exports and a drop in government spending were both drags on growth.

The main piece of good news in the report is that inflation remained tame in the fourth quarter.  The Federal Reserve, pointing to sluggish growth, substantial excess capacity, and low inflation, announced this week that it intends to keep interest rates very low through late 2014.  As I said yesterday, with Congress unlikely to do anything to help the economy beyond extending the payroll tax cut and emergency unemployment insurance (and even these steps aren’t assured), any hope for nurturing the expansion is in the Fed’s hands.

For a look at the economic legacy of the Great Recession, see our chart book.

At Least We Have the Fed

New CBO Report: Up to 2.4 Million People Owe Their Jobs to the Recovery Act

June 6, 2019
PreviousAt Least We Have the Fed
NextNew GDP Numbers Show Historic Drop in State and Local Spending
Stay up to date
Receive the latest news and reports from the Center