The nutrition changes that the House Agriculture Committee and Education and Labor Committee are set to consider this week are critical to addressing today’s extraordinarily high levels of hunger and hardship. Both committees should move quickly to approve the bills to mitigate the harm for the millions of households and children who aren’t getting enough to eat. 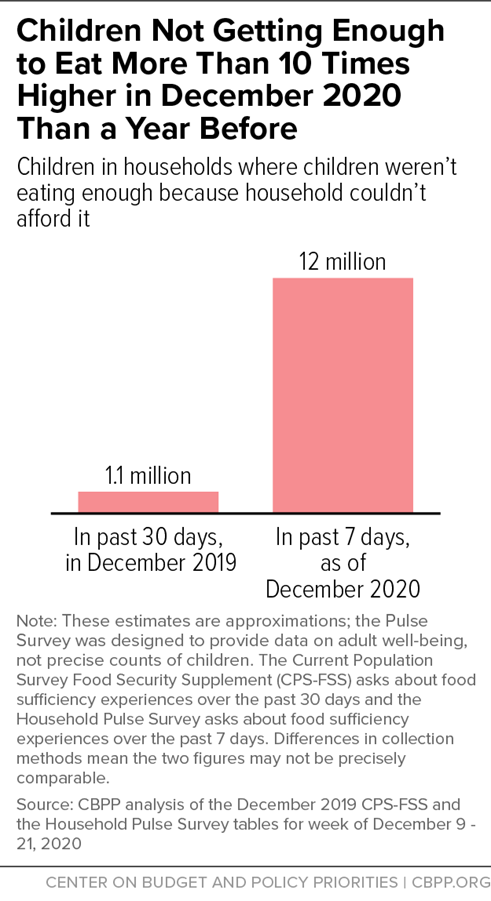 The number of households struggling to put enough food on the table spiked last spring as the pandemic’s economic effects took hold. It remained nearly three times pre-pandemic levels over the summer and rose even higher in recent months.

The two House bills take significant steps to combat the rise in food insecurity by:

Extending the 15 percent increase in SNAP benefits. The increase, enacted in the December COVID-19 relief package and worth about $27 per person per month, is slated to expire in June — likely before the economy has recovered and while food insecurity will likely still be high. The Agriculture Committee bill would extend this increase through September, helping millions of families and children have enough to eat while injecting added stimulus into the economy.

A similar increase during the Great Recession lessened food insecurity among SNAP recipients. And the Congressional Budget Office and Moody’s Analytics rate SNAP as one of the most effective and efficient supports for the economy during downturns, measured on a bang-for-the-buck basis. Every dollar in new SNAP benefits boosts gross domestic product by about $1.50 when the economy is weak, according to an Agriculture Department study.

About 40 percent of the added benefits from the 15 percent increase go to households with income below half of the federal poverty level; nearly two-thirds go to households with children. Because of implementation decisions made by the Trump Administration, many of these households were left out of the Families First Act’s emergency SNAP allotments. The 15 percent increase, in contrast, helps all SNAP households, including those with the lowest incomes and thus the most difficulty affording food.

The bill also would add $1.1 billion for state administrative costs to help states accommodate the increased demand for SNAP.

Extending the Pandemic EBT (P-EBT) program and strengthening WIC. Two child nutrition provisions in the Education and Labor Committee bill aim directly at reducing food hardship among children of all ages and the stark racial disparities in hardship.

The bill would allow states to continue P-EBT, which provides grocery benefits to replace meals that children miss when schools or child care providers are closed, through the summer. And it would invest in the WIC nutrition program for low-income women, infants, and children to modernize the program, support innovative service delivery models, and temporarily raise the amount of fruit and vegetables participants can obtain.

Evidence shows that P-EBT can reduce the alarming levels of food hardship among children, while decades of research have shown that WIC improves the nutrition and health of low-income children. Delay in providing this help can be costly, as food insecurity among children can have lasting consequences. For infants and young children, lack of access to good nutrition can lead directly to poorer life outcomes. School-aged children who don’t get enough to eat may have more difficulty learning in school, which can translate to lower high school completion rates, lower standardized test scores, and lower earnings in adulthood.

While the risk is greatest for children who chronically lack sufficient food, the shock of becoming food insecure may itself affect children’s behavior. And living in a household that’s even temporarily food insecure can have negative effects on toddlers’ development.

Helping address elevated food need in Puerto Rico and certain other U.S. territories. Puerto Rico, American Samoa, and the Commonwealth of the Northern Mariana Islands receive capped block grants for food assistance in lieu of participating in SNAP, which limits their ability to respond to increased need. The Agriculture Committee bill would add $1 billion to those block grants. This funding, along with $614 million enacted in December for these territories, would enable these territories to better meet residents’ food assistance needs over the next year.

The increased assistance would help in Puerto Rico’s efforts to recover from a series of adversities it has suffered. The island entered the pandemic after more than a decade of economic decline, coupled with hurricanes, earthquakes, and an unprecedented, ongoing bankruptcy process, but Puerto Rico residents in many instances have little or no access to key parts of the nation’s safety net.

Policymakers may need, in the next COVID recovery bill, to extend the SNAP and P-EBT provisions into the fall if the economy still is not fully recovered or schools have not fully reopened. But the important changes in the House bills would go a long way toward easing hardship and boosting the economy this summer.

April 25, 2022
PreviousCOVID Relief Package Includes Important Unemployment Benefit Extensions, But Duration Should Be Extended
NextPandemic Emergency Fund Would Help Families With Lowest Incomes
Stay up to date
Receive the latest news and reports from the Center