Unfortunately, Congress appears headed in the opposite direction.

An increase in poverty and rising rents produced a spike in homelessness among families in recent years.  With the economy still weak and 14 million people out of work, the situation is bound to get worse. . . . [T]he startling report to Congress issued by the Department of Housing and Urban Development last June found that the number of homeless families that have turned to shelters jumped by 20 percent, to 567,334 in 2010 from 473,541 in 2007.

Things would no doubt be considerably worse without the $1.5 billion homelessness prevention program that Congress passed as part of the American Recovery and Reinvestment Act.  With that money, HUD helped to prevent more than a million people from becoming homeless.  It provided them with short- and medium-term rental assistance, moving expenses and other services.  It quickly re-housed those who landed in shelters.  With most of that recovery money gone, it is important that Congress provide the $2.4 billion in homeless assistance funding that the administration has requested.

Census data showing a big increase in the number of families living doubled up with friends and relatives suggests that another wave of homelessness may be in the offing.  With these clear needs, Congress must preserve and strengthen the programs that are aimed at helping the vulnerable.  It should also direct more money into a program that builds and renovates affordable housing, which is in increasingly short supply. 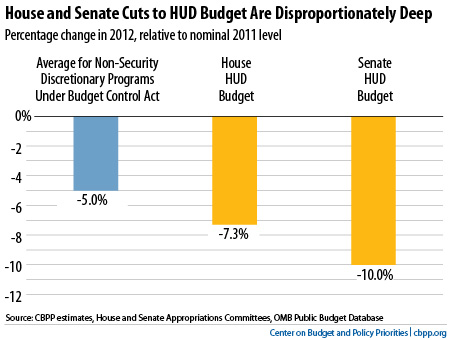 Both the House and Senate, however, are proposing deep cuts in funding for low-income housing programs in HUD’s 2012 budget (see graph).  For instance, both bills freeze homeless assistance funding at $1.9 billion, $470 million below the Administration’s request.

Moreover, as we have explained, neither bill provides enough funding to prevent significant cuts in the number of families receiving aid from HUD’s major rental assistance programs, despite their proven effectiveness in reducing family homelessness.

In short, both bills put a disproportionate burden of deficit reduction on the people who rely on federal housing assistance to remain in their homes.

Congress should, at a minimum, provide the resources required to continue rental assistance for the number of low-income families that now receive it.

October 13, 2011
PreviousPuncturing the Small Business-Jobs Myth
NextThe High Cost of a Four-Day School Week
Stay up to date
Receive the latest news and reports from the Center