More than 1.8 million students attended schools in 11 states last year that offered community eligibility, according to new data from the U.S. Department of Agriculture (see chart).  Community eligibility, which allows high-poverty schools to offer breakfast and lunch to all students at no charge without having to process meal applications, is now available nationwide, enabling schools in all 50 states to become hunger free.  Eligible schools have until August 31 to sign up for the coming school year.
Image 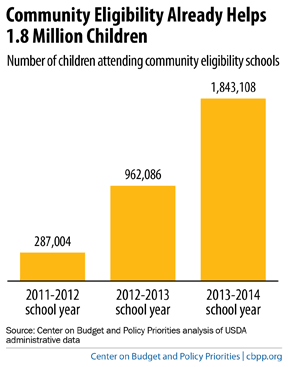