The share of Americans without health insurance rose from 7.9 percent in 2017 to 8.5 percent in 2018, the Census Bureau’s new Current Population Survey (CPS) data show — the first increase since the 2010 Affordable Care Act (ACA) drove historic coverage gains, particularly after its major coverage expansions took effect in 2014.

Additional new data from the Census Bureau’s American Community Survey (ACS) also show an increase in the uninsured rate in 2018, though a smaller one. Unlike the CPS data, the ACS data can help examine multi-year trends. They show that the number of uninsured rose to 28.6 million in 2018, from its historic low of 27.3 million in 2016. (See chart.) The uninsured rate fell by more than one-third between 2013 and 2016 but rose modestly in both 2017 and 2018. 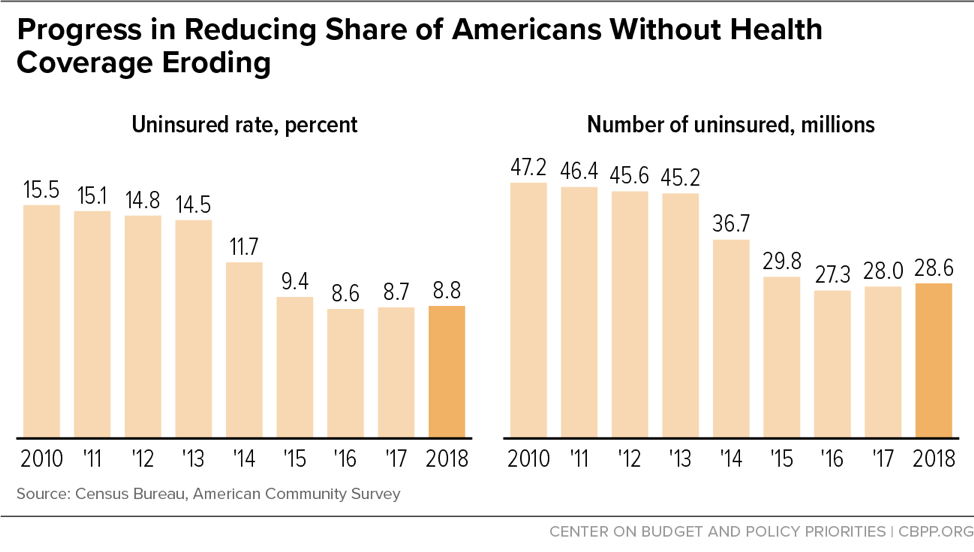 Taken as a whole, today’s Census data provide the clearest evidence yet that Trump Administration efforts to weaken health coverage under the ACA are taking a toll. They include canceling most federal outreach efforts for the open enrollment period for 2018 marketplace coverage, supporting new state policies that make it harder for people to enroll or stay enrolled in Medicaid, issuing rules to expand short-term and association health plans (which are exempt from many ACA consumer protections), and creating public confusion about the ACA’s future by refusing to defend its constitutionality in a lawsuit by Republican state officials.

Those sabotage efforts likely contributed heavily to coverage losses by creating barriers to affordable coverage. Roughly 55 percent of the uninsured are eligible for coverage with financial assistance under the ACA or other public programs, the Kaiser Family Foundation and Urban Institute find.

While the uninsured rate rose for the overall population in 2018, the increases were the greatest (in percentage terms) for individuals with incomes between 300 percent and 400 percent of the federal poverty line, residents of the South, children, and full-time, year-round workers.

Of particular note, the uninsured rate rose 1.6 percentage points among Latino people — more than for any other racial or ethnic group — and rose 1.0 percentage points for Latino children. Foreign-born residents, both citizens and non-citizens, also suffered large coverage losses. The Administration’s harsh anti-immigrant stance — including changing how Medicaid eligibility affects decisions concerning who can legally enter the United States and which immigrants here legally can adjust to lawful permanent resident status — have made some lawfully present immigrants afraid to enroll in Medicaid and subsidized marketplace coverage, even though they are eligible. Today’s data suggest that these policies likely have already increased uninsured rates in families that include immigrant members.

A growing body of research highlights the significant short- and long-term benefits of health coverage for the uninsured. Medicaid coverage expands access to health care providers and services, improves health, increases preventive care and screenings, and reduces financial hardship, studies show. It also improves children’s long-term educational outcomes and earnings as adults. More recently, a landmark study found that the ACA’s Medicaid expansion to low-income adults, if implemented nationwide, would save more than 10,000 lives each year.

Similarly, more than 7 of 10 adults with marketplace coverage used it to visit a provider or fill a prescription, a Commonwealth Fund survey finds, and 61 percent of them said they couldn’t have obtained this care without the coverage.

Despite the stalled health coverage progress in 2017, the Administration continued its anti-ACA activities. It issued rules that (1) weaken protections for many groups, including those with pre-existing conditions, from discrimination in health care settings and programs; (2) threaten coverage for workers by expanding employers’ options to offer health reimbursement arrangements rather than traditional coverage; and (3) radically change “public charge” policies related to immigration, creating confusion and fear for lawful permanent residents that receiving Medicaid or marketplace coverage could make it harder for them to remain in the country. In addition, an estimated 4 million people are expected to lose coverage in 2019 due to policymakers’ decision to repeal the ACA’s individual mandate to enroll in health coverage.

For the first time this year, today’s Census report includes some preliminary data on uninsured rates for the current year. These data show a further rise in the uninsured rate between March 2018 and March 2019.

And nearly 20 million more people would become uninsured in the first year if the courts were to strike down the ACA, the Urban Institute estimates.

What to Look for in Next Week’s Census Figures on Poverty, Income, and Health Insurance