New Congressional Budget Office (CBO) projections show that spending on SNAP (formerly food stamps) will fall over the next decade faster than it previously estimated.  SNAP spending will fall as a share of the economy, reaching 1995 levels in 2019 (see chart).  These projections show that SNAP provided an effective response to the recession — growing temporarily as need rose — and isn’t contributing to long-term budgetary pressures. 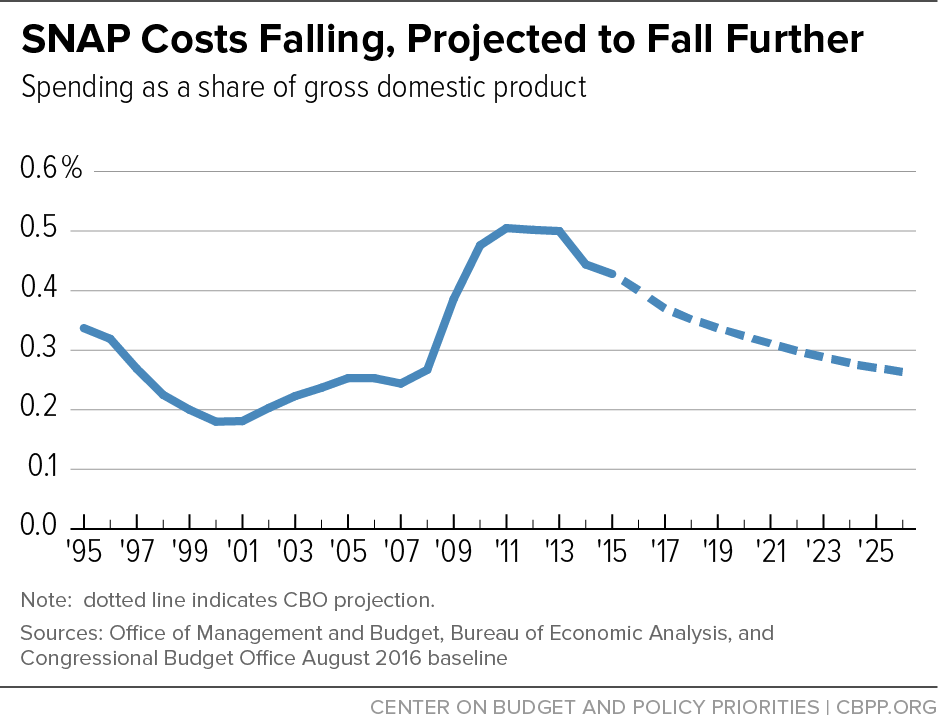 The updated CBO forecast projects that SNAP spending will be $23 billion (3 percent) lower in nominal terms over the next ten years than CBO last estimated in March.  The revised estimates likely are in large part due to lower food price inflation and lower participation in the program this year than CBO included in the March estimate.

The number of SNAP participants grew during the Great Recession and its aftermath as poverty rose and stayed high, helping millions of Americans weather harsh economic times.  SNAP spending per person also grew due to a temporary benefit increase that helped Americans hurt by the recession put food on the table and served as effective economic stimulus.

Participation in SNAP already has fallen by more than 4 million people since peaking in December 2012, reflecting both an improving economy and the return in many states of a three-month time limit for unemployed childless adults.

June 25, 2019
PreviousPoorest Children in Single-Mother Families Got Poorer Under Welfare Reform
NextIn Case You Missed It….
Stay up to date
Receive the latest news and reports from the Center