The Congressional Budget Office’s (CBO) new report on the budget picture opens by saying, “The long-term outlook for the federal budget has worsened dramatically over the past several years,” blaming the Great Recession and the steps taken to address it.  But CBO’s own data, in that very report, show that’s not the case.  The CBO data that allow an apples-to-apples comparison of its new projections with its earlier ones from before the recession show that the long-term budget picture has improved significantly, not worsened.

As the chart shows, projected federal debt as a percent of gross domestic product (GDP) under CBO’s “alternative fiscal scenario” is lower in 2040 — and, indeed, in every year from 2030 on — than in any CBO projections since 2003.  That’s not surprising, given the significant amount of deficit reduction that policymakers have enacted since 2010 and the slowdown in health spending, as we discussed here.

To be sure, debt is still projected to rise, and the fiscal path still is ultimately unsustainable.  Policymakers will have to take steps to stabilize or reduce projected debt ratios.  But the challenge is less daunting than it was projected to be a few years ago, and it will require less dramatic policy changes to address it. 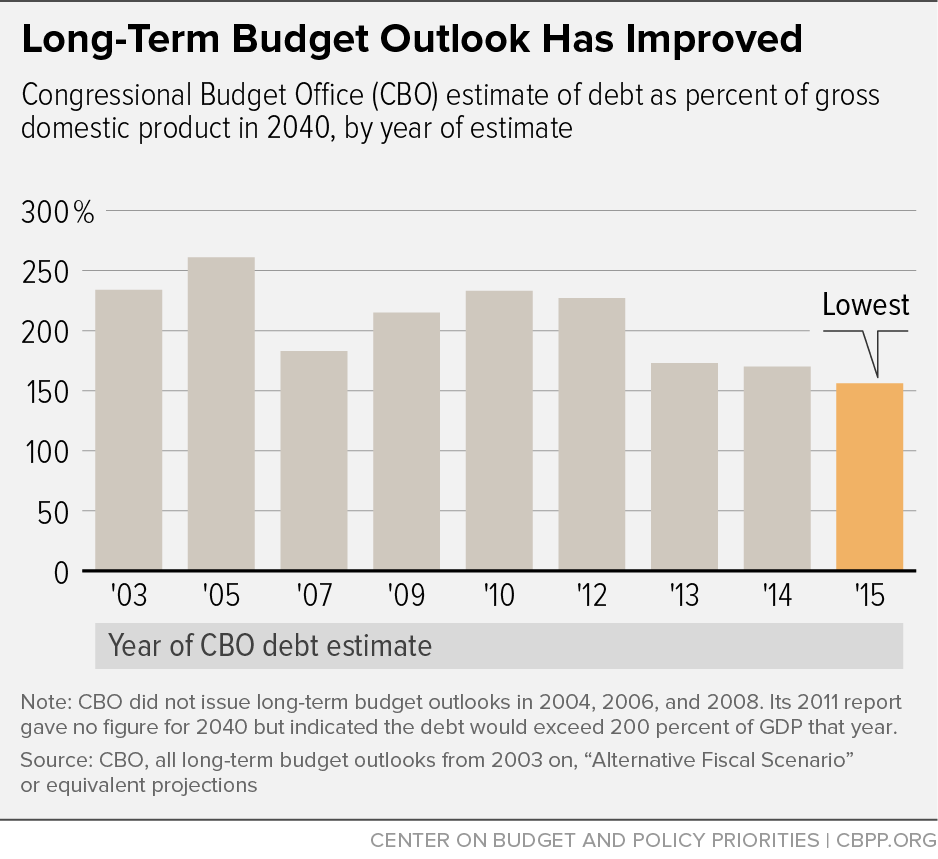 As we’ve noted, we regard CBO’s “alternative fiscal scenario” as unduly pessimistic because it assumes the enactment of new and costly policies, such as immediately ending sequestration’s budget cuts and permanently extending all of the “tax extenders” without offsetting any of those costs, that would increase long-term budget deficits significantly.  But what matters here is that this scenario relies on a consistent set of assumptions, so one can compare projections made at different points in time.  And they show a marked improvement in the long-term budget outlook.

CBO’s new projections under its “extended baseline” are indeed worse than before the recession, but that’s clearly an apples-to-oranges comparison.  The extended baseline projections that CBO issued before 2013 mechanically followed current law, under which policymakers would let all of the tax relief that was slated to end actually end on time.  Specifically, it assumed that: (1) all of President Bush’s tax cuts would expire, and 2) relief from the Alternative Minimum Tax (AMT) would end — each of which would impose significant tax increases on tens of millions of American households.  Policymakers were never realistically going to do that, however, and, in fact, President Obama and Congress extended most of the Bush tax cuts and AMT relief on a permanent basis at the end of 2012.

Still, if one chooses to compare CBO’s long-term projections that it made under its extended baseline before 2013 to its more recent ones — and conclude that the long-term outlook has worsened significantly — CBO’s own figures make clear that the deterioration is rooted not in the Great Recession and steps taken to address it.  The cause is the decision to make most of the Bush tax cuts and AMT relief permanent.

Projected Ten-Year Deficits Have Shrunk by Nearly $5 Trillion Since 2010, Mostly Due to Legislative Changes

July 29, 2022
PreviousTANF: A Safety Net for Few Poor Families
Next3 Reasons Why Kansas’ Shift to Sales Taxes Is a Bad Idea
Stay up to date
Receive the latest news and reports from the Center