2019 could be a banner year for state Earned Income Tax Credits (EITCs), as governors and lawmakers have introduced proposals to create and expand the credits in at least 26 states this year. Such proposals would supplement the federal EITC’s well-documented, long-term positive effects on children while improving racial and gender equity and the nation’s economic prospects.

Twenty-nine states plus the District of Columbia and Puerto Rico already have a state EITC to help low-wage, working households meet basic needs (see map below). (Most state credits are structured as a percentage of the federal EITC.) States that haven’t yet enacted an EITC should do so. And those with small or non-refundable credits — which don’t give workers the full value of the credit they’ve earned if it exceeds what they owe in income taxes — should expand them.

EITCs help families afford the very things that keep them working, like child care. They also reduce poverty and help children do better and go further in school. By investing in an EITC, states can make a big difference for children, families, and local economies. 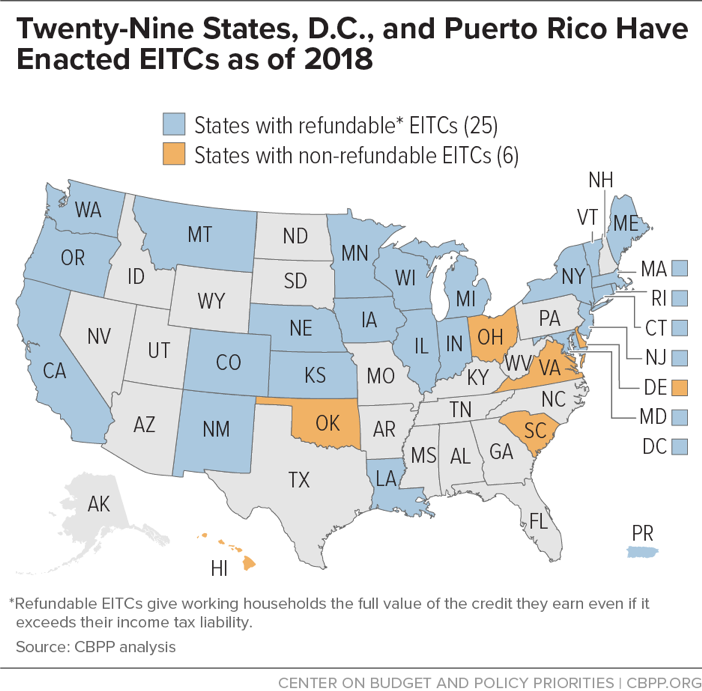 How Much Would A State Earned Income Tax Credit Cost in 2008?

March 9, 2020
PreviousPuerto Rico Forced to Slash Basic Food Aid While Waiting for Washington to Act
NextMore Evidence of Post-ACA Slowdown in Health Care Spending
Stay up to date
Receive the latest news and reports from the Center