The share of children of color living in deep poverty (below half the poverty line) rose in the decade after a 1996 law created the Temporary Assistance for Needy Families (TANF) block grant and weakened other anti-poverty programs, my colleagues have found. TANF, which replaced Aid to Families with Dependent Children (AFDC), has deteriorated since then, as we’ve detailed in recent papers on TANF’s spending, benefit levels, and reach to families in poverty. State and federal policymakers can ensure that TANF does more to support children in deep poverty.

Deep poverty rose among children between 1995 and 2005 mainly due to the loss of cash assistance for millions of families under TANF policies that take cash assistance away from those who don’t meet a work requirement, impose strict time limits, and impose barriers that prevent families from accessing the program. Our three latest TANF papers detail the program’s poor performance. 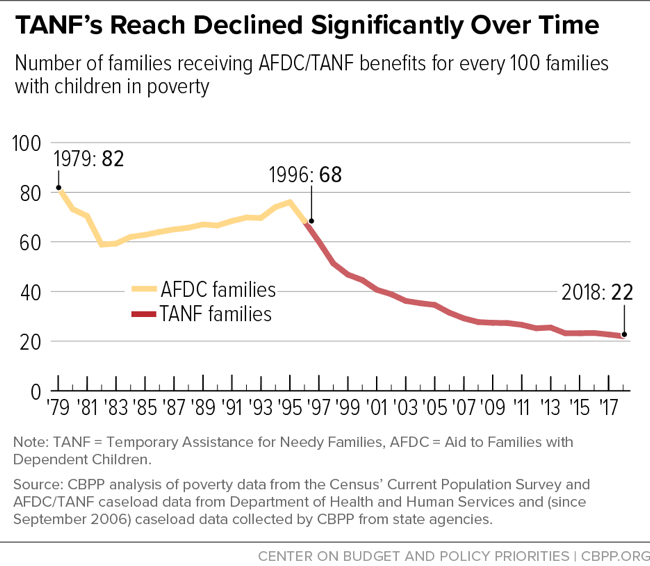 TANF’s strength depends greatly on where a family lives. Nationally, Black and Latinx children are likelier to live in the six states with the weakest TANF programs. Nearly a quarter of Black children and nearly a quarter of Latinx children live in Arkansas, Indiana, Louisiana, Mississippi, North Carolina, and Texas, which have the most limited reach to families in poverty, the lowest benefits, and the smallest shares of spending on basic assistance. Only 16 percent of white children live in these states. That’s particularly troubling given that children of color were likelier to live in deep poverty in 2016, the most recent year for which these data are available.

TANF should do more. Cash assistance is a critical piece of public support for families that lack enough income to make ends meet. Economic security programs, like TANF, can improve children’s long-term success, research shows. Black, brown, and white children can thrive when they have access to more resources for a stable foundation during childhood.

To strengthen TANF, state and federal policymakers must ensure that it provides meaningful assistance to families. States can boost benefits, remove barriers to assistance, and stop kicking off families while they are striving to find stability. Federal lawmakers must hold states accountable for serving more families in need and investing in strategies that support them.