The tax and Medicare components of the deficit-reduction proposal that Speaker John Boehner offered last week received lots of attention, but the proposal’s $300 billion cut in discretionary programs over the next ten years attracted relatively little notice.  That reduction, however, would likely result in cuts to non-defense discretionary (NDD) programs over the next decade that are nearly as deep as the cuts that these programs will face if the automatic across-the-board cuts (“sequestration”) take effect starting in January and remain in effect throughout the coming decade.

Non-defense discretionary programs encompass most of the things the federal government does outside of defense and entitlement programs, from ensuring food safety to mine inspections, border patrol, and federal law enforcement; education programs including Head Start, K-12 education, and Pell Grants; environmental protection; veterans’ medical and other support programs; scientific and medical research; and certain types of assistance for low-income families such as WIC and homelessness prevention. 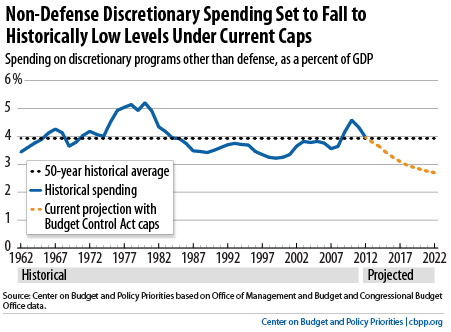 Speaker Boehner didn’t specify how much of the $300 billion cut would come from defense versus non-defense discretionary programs, but most or all would likely come from non-defense.  The 2011 Budget Control Act (BCA) requires significant cuts in both sets of programs, and Speaker Boehner has said that defense programs have taken “more than their fair share of the hits.”

Moreover, the budget resolution that the House passed last spring took all of its additional cuts in discretionary programs from the non-defense area and raised defense funding levels above the levels that the BCA allows.

If sequestration takes effect, total funding for NDD programs will drop by $356 billion over ten years (below the levels under the BCA caps), and actual spending will drop by $331 billion.  Some funds are spent over a number of years, so the funding provided in a given year isn’t exactly the same as the amount spent that year.

Regardless of whether the Boehner proposal’s $300 billion discretionary cut refers to funding or spending (the plan doesn’t specify), the NDD cuts clearly would be nearly as large as under sequestration over the ten-year period, assuming that his plan protects defense from further cuts. (The plan also doesn’t specify how much would be cut each year so we don’t know if the cuts would take a different year-by-year path than sequestration.)

NDD programs already face deep cuts under the BCA caps — $900 billion over ten years — which will shrink spending on these programs to its lowest level as a share of the economy on record, in data going back to 1962 (see chart).  (That $900 billion cut is relative to the Congressional Budget Office baseline levels at the end of 2010, when the Bowles-Simpson report was issued.)

Greenstein on the Republican Budget Offer

The Myth of the Exploding Safety Net

October 23, 2012
PreviousThe $90 Billion in Health Savings That We’ve Already Enacted
NextMedicaid Increase for Doctors Shouldn’t Be on Chopping Block
Stay up to date
Receive the latest news and reports from the Center