Testifying at a Senate Budget Committee hearing today on “Assessing Inequality, Mobility, and Opportunity,” CBPP Senior Fellow Jared Bernstein explained that, “even with recent improvements in the job market, the American economy still faces significant challenges, particularly the historically high levels of income and wealth inequality, the squeeze on middle-class incomes, and elevated rates of poverty.”  Below are the main findings of his testimony: 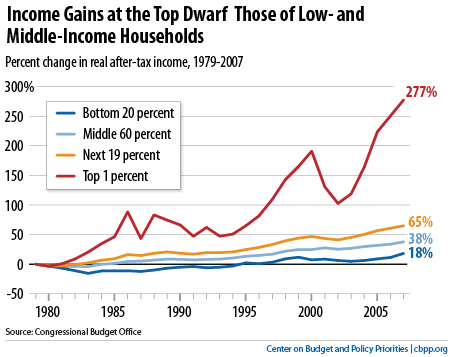 For example, recent Congressional Budget Office analysis predicts that full and sudden expiration of the 2001 and 2003 tax cuts in 2013 would push unemployment higher.  Similarly, cuts to programs that are supporting low and moderate income families, like nutritional assistance, the Earned Income Tax Credit, or the Child Tax Credit, could worsen poverty and inequality.  This worsening would further exacerbate inequality if we were to then turn around and use some of these savings to lower taxes on the wealthiest households.

While this may sound fanciful, it is not. In fact, the 2011 budget proposed by House Republicans does precisely this. As analysis from the Center on Budget and Policy Priorities shows, almost two-thirds of that budget’s spending cuts over ten years — $2.9 trillion —come from programs targeted at households with low and moderate incomes. And those budget savings are used to support tax cuts for the wealthiest households.

With this in mind, a central question of this testimony is how policymakers can address these three problems — inequality, economic slack, and the fiscal path — without solving one problem at the expense of exacerbating another problem. Most pointedly, revenue and spending policies designed to put the nation on a sustainable budget path must not exacerbate inequality, poverty, or the ongoing middle-class squeeze.

The Latest on Inequality

OECD: Tax and Spending Policy Can Push Against Rising Inequality

December 2, 2011
PreviousSafety Net Spending Is Supposed to Rise in a Weak Economy
NextDebunking the “Entitlement Society” Myth
Stay up to date
Receive the latest news and reports from the Center