| By Chad Stone
House Speaker John Boehner declared this week that huge spending cuts are a prerequisite for raising the debt limit and that tax increases are off the table in deficit reduction negotiations.  Commentators have sharply criticized his rationale, calling it “economic illiteracy,” “gibberish,” and an “incoherent, impervious-to-facts economic philosophy.”  The Speaker also gets his history wrong by denigrating the landmark 1990 budget agreement and misrepresenting the relationship between tax policy and economic performance over the past two decades. We’ve weighed in here, here, and here on how Speaker Boehner and other Republican lawmakers’ economic arguments are detached from the reality of our economic and budget situation.  The Speaker also has potentially undermined serious budget negotiations by creating his own history of the 1990 budget agreement. In Boehner’s telling, the 1990 agreement was a “so-called bargain” that caused “the recession of the early 1990s.”  The truth is that the recession began in July 1990, the bipartisan budget agreement was enacted in November, and the longest economic recovery on record started in March 1991.  The combination of the strong recovery and the 1990 agreement, which reduced the deficit by $500 billion over five years with a balanced package of tax increases and spending cuts, paved the way for  a balanced budget by the end of the decade. The Speaker also repeats the Republican shibboleth that raising taxes is the enemy of growth.  That’s what they said in 1993 when President Clinton and a Democratic Congress—with no Republican votes—enacted a tax increase on top earners.  As the chart shows, job creation and economic growth were significantly stronger in the recovery following the Clinton tax increase than they were following the 2001 Bush tax cut. And the Clinton policies produced a balanced budget.
Image 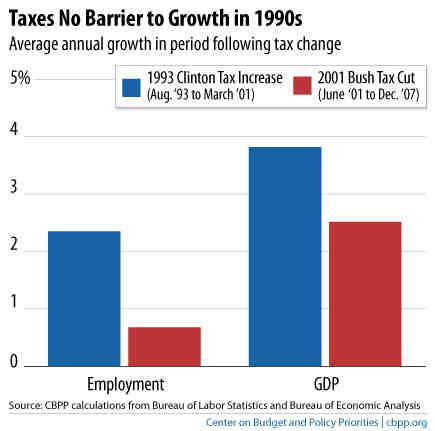