What to Look for in the Social Security Trustees’ Report 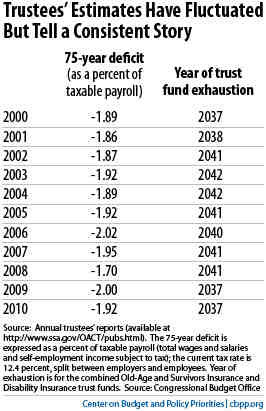 This afternoon, the trustees of the Social Security system — the Secretaries of the Treasury, Health and Human Services, and Labor; the Commissioner of Social Security; and two public trustees — will release their annual review of the program’s finances.  Here’s something to keep in mind when you look at the report later today:  we know that year-to-year fluctuations in the trustees’ long-term estimates are normal.  Social Security is subject to a variety of economic and demographic uncertainties, and the actuaries are constantly improving their methods. Over the last decade, the estimated gap between Social Security’s tax revenues and its expenditures over the next 75 years has fluctuated  within a narrow band of 1.70 to 2.02 percent of taxable payroll (see table).  The estimated year in which the trust fund will be exhausted has ranged between 2037 and 2042.  It’s important to remember that, even after the trust fund is exhausted, Social Security will still be able to pay about three-fourths of scheduled benefits using its payroll tax income — a fact that news stories often overlook. Check out our analysis of last year’s report here.  We’ll be updating it as soon as we have a chance to digest the new report.
Topics:
Social Security