| By Kathy Ruffing
Social Security’s trustees will release their annual review of the program’s finances on Monday, and while we’re not sure what the report will say, the trustees last year estimated that Social Security’s combined trust funds will be exhausted in 2033.  That was well within the range that the program’s trustees have projected in their reports for the past two decades (see table). Even after the combined trust funds — the Old-Age and Survivors Insurance (OASI) trust fund and the Disability Insurance (DI) trust fund — are exhausted, Social Security could still pay about three-fourths of scheduled benefits using its tax income, which is a fact that news stories often overlook. Fluctuations from year to year in the trustees’ long-term estimates are normal.  A variety of demographic factors (such as fertility, mortality, and immigration) and economic variables (including wage growth, inflation, and interest rates) affect Social Security, and the actuaries constantly improve their methods. Because of these fluctuations, revisions of a year or two, in either direction, are not a cause for alarm (or for celebration).  In fact, the trustees caution that their projections are uncertain.  For example, last year they judged that there was an 80 percent probability that trust fund exhaustion would occur sometime between 2029 and 2039 — and a 95 percent chance that it’d happen between 2028 and 2044.  More recently, the Congressional Budget Office (CBO) estimated that exhaustion would occur in 2030, largely because CBO expects somewhat faster improvements in mortality.  In short, all reasonable estimates show a manageable long-run challenge that needs to be addressed but not an immediate crisis. The new report will note that the DI trust fund, which is legally separate from the much larger OASI trust fund, will need to be replenished sooner.  (Last year the trustees forecast that would be necessary in calendar year 2016; CBO projects that it’ll be necessary early in fiscal year 2017, which begins in October 2016.)  Traditionally, Congress has reallocated tax rates between the OASI and DI funds to address such challenges.  That’s why analysts usually focus on the outlook for the combined trust funds. Legislators should boost DI’s share of the payroll tax by 2016 to avert a harsh and unnecessary cut in benefits to its severely impaired recipients.  And policymakers should work on a balanced package of Social Security reforms that achieves overall long-term solvency while preserving and even strengthening the program’s vital role in protecting breadwinners and their families. You can find our analysis of last year’s report here, and our other Social Security analyses here. We’ll be back on Monday with our initial reaction to the new Social Security and Medicare reports.
Image 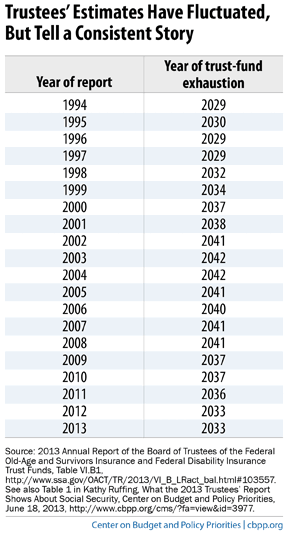