Note: We've revised the graph in this post. Some news media and policymakers have seriously misrepresented the findings of the 2012 Social Security and Medicare trustees’ reports.  The CBS Evening News reported, “Medicare will run out of money in 2024.  Social Security retirement benefits run out in 2035.”   The Republican Doctors’ Caucus says that Medicare is going “bankrupt.” Such assertions are extremely misleading, as our new paper explains. The trustees project that the combined Social Security retirement, survivors, and disability trust funds will be “exhausted” — in the technical sense of the term — in 2033 and Medicare’s Hospital Insurance (HI) trust fund in 2024.  (Social Security’s retirement and survivors’ trust fund, taken alone, will be exhausted in 2035.)  But this does not mean that Social Security and Medicare will have no more financial resources and cease to pay benefits on these dates, as “running out of money” or going “bankrupt” suggests.
Image 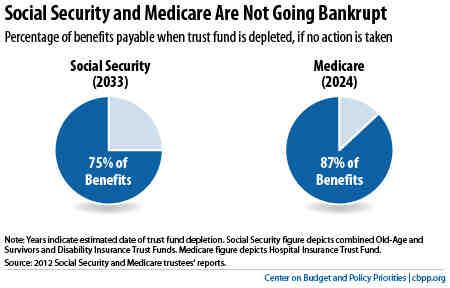 As the Social Security commissioner, Michael Astrue, told reporters Monday, “Please, please remember that exhaustion is an actuarial term of art, and it does not mean that there will be no money left to pay any benefits.  After 2033, even if Congress does nothing, there will still be sufficient assets (from payroll taxes) to pay about 75 percent of [retirement and survivors’] benefits.”  Similarly, when the Medicare HI trust fund becomes insolvent in 2024, payroll taxes and other revenues will still be sufficient to pay 87 percent of hospital insurance costs (see chart). To be sure, policymakers should not stand by and let the Social Security or Medicare trust funds become depleted. Although Social Security faces no imminent crisis, policymakers should act sooner rather than later to restore its long-term solvency so that they can phase in needed reforms.  Medicare faces greater long-term financial challenges, stemming from the aging of the population and the continued rise in costs throughout the U.S. health care system.  Congress will need to act, as it has done frequently in the past, to keep spending and resources in balance — as well as to pursue policies to slow health care costs as we learn more about how to do so without sacrificing health care quality.  The health reform law creates a number of pilot projects that should help in this area. But the public should not panic, and policymakers should not be driven to adopt radical proposals that would undermine the fundamental nature of these programs, by false claims that the programs are on the verge of “bankruptcy.”
Related Posts:
Topics:
Disability, Federal Budget, Social Security, Budget Outlook, Health Reform, Medicare, Health
PreviousDefunding State Health Insurance Exchanges Would Slow Health Reform
NextThe Reality of Raising Taxes at the Top, Part 1: Would Tax Hikes Shrink Taxable Income?
Stay up to date
Receive the latest news and reports from the Center