Are State and Local Jobs On the Rebound?

A recent USA Today article noted that states and local governments hired more workers (828,000) in the first four months of 2012 than they did in those months last year.  That number is only telling half the story.  Highlighting that figure makes it sound like state and local workforces are getting bigger.  But it doesn’t account for the number of workers who left their jobs or were laid off — which has also risen in recent months. When you subtract the number of jobs lost and adjust the data for seasonal changes in employment, the number of state and local employees has grown only slightly this year.  And state and local governments have 662,000 fewer workers than they did when employment peaked in August 2008. Meanwhile, they’re facing increased demand for services.  For example, there will be 540,000 more public K-12 students in the upcoming school year than there were in the 2007-2008 school year. And as we’ve previously explained, the reduced public workforce hurts the economy, as it weakens consumer demand and these job losses can have a real impact on residents’ quality of life. The pattern does seem to be improving.  For the past few months, the total number of state and local public sector employees has remained relatively stable.  It’s a good sign that states and local governments are hiring enough new workers to replace those who leave, but they still have to make do with a significantly smaller workforce than they had in 2008.
Image 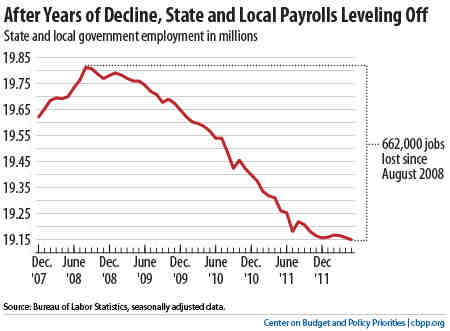 Related Posts:
Topics:
State Budget and Tax, Economy
PreviousOnly 2 in 100 Americans Will Face Penalty for Not Getting Health Coverage
NextAmerican Action Forum Gets the Sign Wrong on Budgetary Impact of Court’s Medicaid Ruling
Stay up to date
Receive the latest news and reports from the Center