After Reinhart-Rogoff, Reflections on the Relationship Between U.S. Debt and Economic Growth

In my two latest posts for the US News & World Report Economic Intelligence blog, I examined the relationship between U.S. government debt and economic growth since World War II, in light of all the attention focused recently on a highly influential paper by economists Carmen Reinhart and Kenneth Rogoff.

For those of you who have come late to the party, here’s some quick background on the Reinhart-Rogoff kerfuffle.  Their study provided intellectual cover for policymakers and pundits pushing budget austerity, because it seemed to show that countries pay a sharp economic growth penalty if they allow their public debt to rise above 90 percent of gross domestic product (GDP).  As I say in the first US News post, that’s hogwash.

A trio of economists at the University of Massachusetts Amherst blew that claim out of the water when they found embarrassing computational mistakes and questionable methodological choices in the study.  Debate continues, however, over how to interpret the loose correlation between growth and debt that nevertheless seems to show up in data covering many countries and many time periods, even if there is no 90 percent magic threshold (or any other magic threshold).  For example, does high debt cause poor economic growth or does poor economic growth lead to higher debt?

Here’s what I say in the first US News post:

Actually, sometimes it’s one, sometimes the other. Countries that pursue irresponsible budget policies put future economic growth at risk and may provoke a financial crisis. But, conversely, an economic downturn produces higher debt even if policy remains unchanged (as struggling individuals and businesses pay less in taxes and struggling families automatically receive more in public benefits) – and sound policies to soften the effects of a recession will likely lead to even more debt in the short term. As Europe, even more than the United States, is learning, misguided austerity can produce weaker economic growth and less deficit reduction than policymakers expect.

In the US News posts, I use this chart to help illustrate the quick narrative history of U.S. deficits and debt (and some of the points that the New York Times’ Paul Krugman makes today): 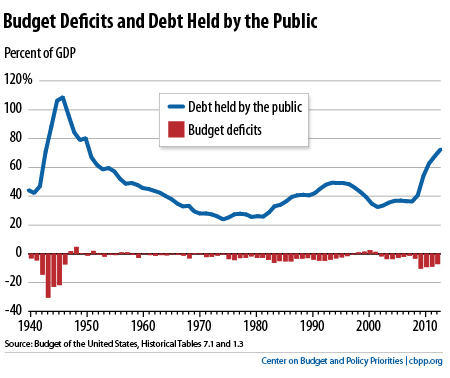 For more, read the posts:  the Relationship Between Debt and Economic Growth, Part I and Part II.

Just the Basics on Deficits and Debt (and Interest)

March 14, 2013
PreviousIn Case You Missed It....
NextBernstein: How to Reconnect Economic Growth and Jobs
Stay up to date
Receive the latest news and reports from the Center