Federal deficits and debt have risen sharply under President Obama, but the evidence continues to show that the Great Recession, President Bush’s tax cuts, and the wars in Iraq and Afghanistan explain most of the deficits on Obama’s watch — based on the latest update of our periodic analysis. Although some lawmakers and pundits continue to blame record deficits on the President’s policies in general — and his actions to boost the economy and stabilize the financial system in particular — these policies swell budget deficits only briefly; they have no significant impact on the long-term challenge of large deficits and rising debt (see chart).
Image 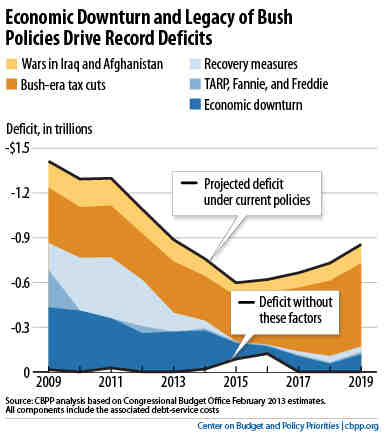 It’s true that longer-term pressures on spending stem chiefly from an aging population and rising health-care costs.  But those pressures aren’t new; policymakers knew about them when they enacted the Bush-era tax cuts and assented to fighting two wars on borrowed money. This update takes into account the latest Congressional Budget Office projections, including a slightly more favorable economic outlook than in our previous version.  It also incorporates January’s American Taxpayer Relief Act (ATRA), which permanently continued the bulk of the Bush tax cuts as well as Alternative Minimum Tax relief.  ATRA did, however, allow about one-fifth of the Bush tax cuts to lapse — chiefly for married couples earning over $450,000 and unmarried people over $400,000.  ATRA also temporarily extended some tax breaks and unemployment insurance benefits that we count in “other recovery measures.”  None of those updates materially alters the story that we told in October 2012 and, indeed, since very early in President Obama’s term. But after more than four years in office, President Obama has continued (with modifications) some policies that began in the Bush era, which blurs the assignment of responsibility for their budgetary effects.  In particular, the enactment of ATRA — over President Obama’s signature — has settled the fate of the Bush-era tax cuts for the foreseeable future.  Regardless, the conclusion remains that without the cost of fighting two wars and large tax cuts, our budget would be in far better shape.
Related Posts:
Topics:
Federal Budget, Federal Tax, Budget Outlook, Personal Taxes, Business Taxes, Economy
PreviousMore States See Advantages to Expanding Medicaid in 2014
Next5 Ways TANF Work Requirements Could Better Promote Work
Stay up to date
Receive the latest news and reports from the Center