Adding a Work Requirement to MaineCare Would Harm Maine’s Families

Maine’s Governor Paul LePage reportedly plans to seek federal approval to require low-income adults to prove they are employed in order to keep their Medicaid benefits, basing the approach on a misleading report about the state’s experience with a three-month time limit for childless adults in the Supplemental Nutrition Assistance Program (SNAP, formerly food stamps). As we’ve explained, the data from Maine show that this time limit has not significantly raised work rates, as the governor claims, but has instead increased hardship for many by cutting off their SNAP benefits, which are equal to about $5 a day in food assistance. Imposing a Medicaid work requirement would likely have the same kind of result, leaving low-income people without health coverage.

In October 2014, Maine began limiting adults without dependent children to just three months of SNAP unless they were working, or could find a spot in a work training program or a place to perform sufficient community service. As a result, thousands of adults lost their food assistance after three months.

State data show that work rates among those who lost benefits barely increased after the time limit took effect (see chart). There’s no evidence that the adults who found work wouldn’t have found it anyway in an improving economy, as many low-income adults work when they can, often in low-wage jobs with high turnover. One survey of food pantry users in Maine found that over half of those who were cut off due to the limit were looking for work but couldn’t find it; more than three-quarters reported increased visits to the food pantry in the year they lost benefits. 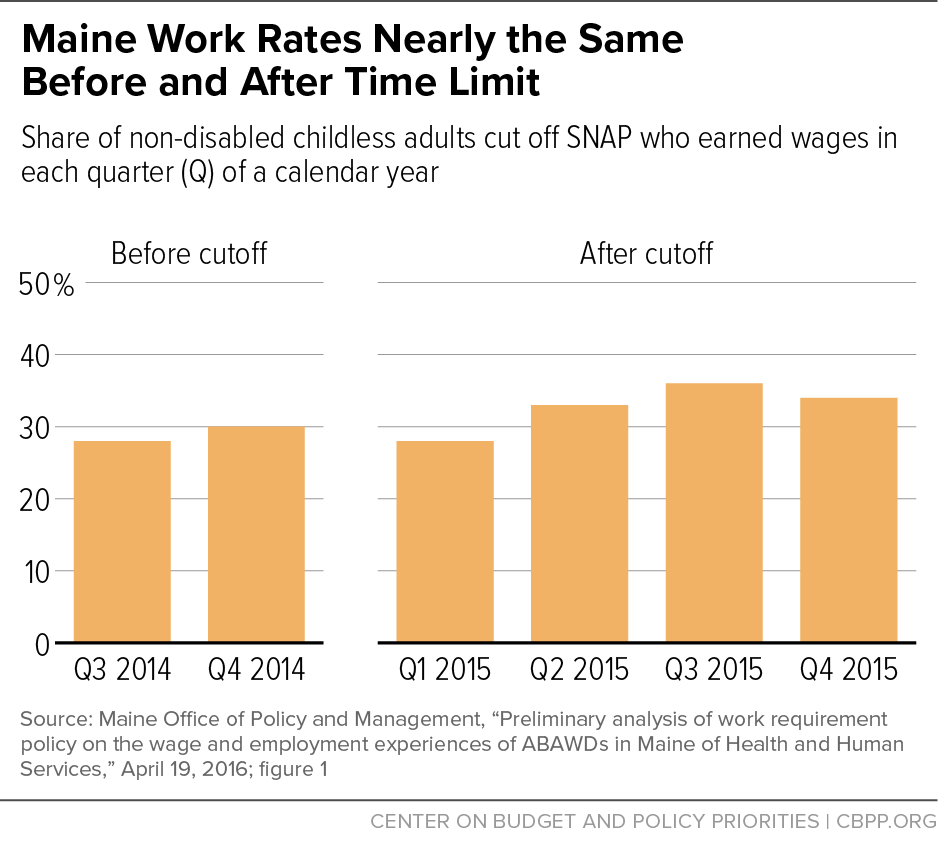 As in SNAP, Gov. LePage’s proposed work requirement likely wouldn’t substantially change work rates, but it could cause many vulnerable people to lose their Medicaid coverage. Already, few adults are eligible for MaineCare, Maine’s Medicaid program, because the state rejected the Affordable Care Act’s Medicaid expansion that would have allowed the state to cover all low-income adults. MaineCare eligibility for adults is limited to seniors, people with disabilities, pregnant women, adults with HIV/AIDS, and parents with annual family incomes up to $25,830 for a family of four. (Gov. LePage also proposed earlier this year to lower Medicaid eligibility for parents to $9,720 per year for a family of four.)

A work requirement would allow even fewer adults to enroll in Medicaid. For people with health conditions like HIV/AIDS, uncontrolled diabetes, or an opioid addiction, Medicaid can enable them to access treatment that could help them join the workforce and stay employed. If they lose coverage, it’s more difficult to stay healthy and to find and hold a job.

Maine’s Health and Human Services Commissioner, who oversees both the SNAP time limit and Medicaid, said that linking assistance to work helps both beneficiaries and Maine companies seeking to fill jobs. But the reality is that nationwide, most people on Medicaid who can work do so, and of those that don’t, most are caring for a family member or have serious health problems. A Medicaid work requirement isn’t likely to change that.