We released an analysis today of what’s wrong with the unemployment insurance (UI) provisions of the bill that the House passed yesterday to extend the payroll tax cut and federal emergency UI through next year.  New numbers from the Department of Labor (DOL) put a human face on that analysis — actually 3.3 million faces, because that’s the number of people who would lose unemployment benefits under the House GOP plan compared with what would happen if Congress extended current law.  The table below provides DOL’s state-by-state figures.

The House bill would sharply reduce the number of weeks of UI benefits available to the long-term unemployed, even though jobs remain scarce and long-term unemployment remains at unprecedented levels.  The bill also would institute numerous permanent changes to the UI system  that would not only make it harder for workers who lose their jobs through no fault of their own to qualify for benefits, but also make the system more costly to administer.

Among other things, the bill would deny UI benefits to all workers who lack a high school diploma or GED certificate and are not enrolled in classes to get one — even though employers would still pay UI taxes on the wages paid to these workers and those taxes would effectively come out of the workers’ wages.  It also would allow states to drug-test all UI applicants and condition eligibility on the results — a standard not used for other federal programs ranging from farm price supports to tax subsidies.

And it would allow states to get waivers to institute policies that would use UI funds for purposes other than paying benefits, thereby undermining the fundamental purpose of UI since it was established in the 1930s:  providing financial assistance to workers who lose their jobs through no fault of their own while they look for a new job. 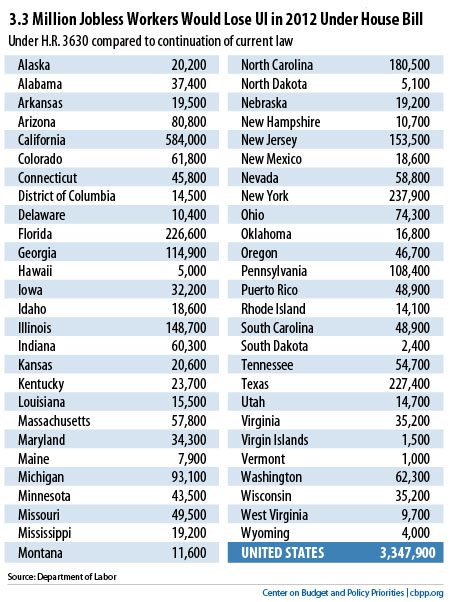 Required Reading on the Payroll Tax Cut — and Much More

December 2, 2011
PreviousTaking Stock of the Safety Net, Part 1: Overview
NextIt’s the Great Recession, Not the Great Vacation, That’s Responsible for High Unemployment
Stay up to date
Receive the latest news and reports from the Center