The Washington Post points out that the 2009 Recovery Act, signed five years ago yesterday, accomplished much more than its critics acknowledge.  When it comes to using the safety net to keep people out of poverty, for example, the Recovery Act was probably the most effective piece of legislation since the 1935 Social Security Act, as our 2011 analysis explained. Six Recovery Act provisions — three new or expanded tax credits, two expansions of unemployment insurance, and a SNAP (food stamp) benefit expansion — kept 6.9 million Americans out of poverty in 2010.  This estimate uses an alternative poverty measure based on National Academy of Sciences recommendations (a forerunner to the Supplemental Poverty Measure that the federal government now regularly reports) that considers the effect of government benefit programs and tax credits as well as cash income.
Image 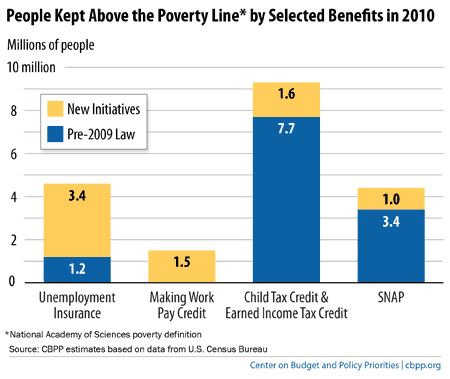 As the graph shows: These figures total more than 6.9 million in part because some people were kept above the poverty line by more than one program.  The 6.9 million total, though, counts each person only once. And, as the graph shows, existing (pre-2009) policies to promote family income also kept millions of Americans out of poverty in 2010. Moreover, these are just the initial effects of government assistance on recipient households.  They don’t show the ripple effect across the economy as government assistance allowed struggling consumers to continue to buy goods and services, despite the crippling recession, contributing to economic growth. To be sure, these figures don’t mean that government assistance staved off all, or even most, recession-related hardship.  But they show that government assistance kept millions of Americans above the poverty line during the worst economic downturn since the Great Depression.  That’s no small accomplishment.
Related Posts:
Topics:
Federal Tax, Food Assistance, Poverty and Inequality, Personal Taxes, Business Taxes, Family Income Support, Working Family Tax Credits, Federal TANF Policy, Economy
PreviousIn Case You Missed It...
NextWhy Health Reform Provides Subsidies in All States
Stay up to date
Receive the latest news and reports from the Center