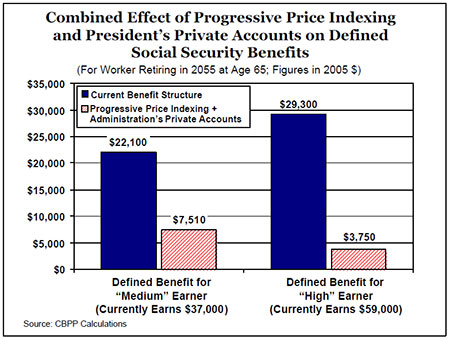 The benefit cuts would be this large because progressive price indexing is designed to reduce benefits enough to close 70 percent of Social Security’s 75-year funding gap by itself.  Plans that include progressive price indexing thus rely heavily on benefit reductions to restore Social Security solvency, rather than on a balanced mix of benefit reductions and revenue increases as was done in 1983.

Table 1 shows the effects on workers who are 15 years old today and retire at age 65 in 2055.  As the table shows, with progressive price indexing and the President’s private accounts, Social Security’s defined benefit would drop dramatically for everyone except low earners.

After Medicare Premiums Are Subtracted, Many Retirees Would Receive No Social Security Benefit at All

The crunch would become even more severe after 2055.  By 2075, as Table 2 shows, the combined effect of progressive price indexing and the President’s private accounts would be to reduce Social Security defined benefits by 73 percent for medium earners and 97 percent for the so-called “high earners,” even before Medicare premiums are taken into account.

In other words, this approach ultimately would decimate traditional Social Security benefits for most workers.  As a result, it would raise serious questions about whether the Social Security system would remain politically viable.  With private accounts being financed through reductions in Social Security benefits rather than in the private-account balances, this approach would make it appear as though most workers were contributing 8.4 percent of their wages to Social Security and getting little or nothing back.  Workers would appear to be getting much more back for the four percent of wages they placed in their private accounts.

The difference would reflect, in part, the fact that the costs of the private accounts were being recouped through reductions in Social Security benefits rather than in the account balances.  The reductions could be made directly in the account balances, but most private-account proponents do not favor that, because the accounts would then appear less attractive. The difference between Social Security pay-outs and pay-outs from private accounts also would reflect the fact that a portion of Social Security payroll taxes go for disability and survivors insurance, for raising the benefits of retirees who have worked at low wages, and, most importantly, to cover the “legacy debt” that Social Security inherited as a result of the decision made when the program started 65 years ago to cover people who were retiring at that time and had paid little or nothing into the system because Social Security wasn’t yet in existence during most of their work careers.  (See the box on below for a further discussion of these issues.)

It is unlikely that a system under which Social Security appeared to be such an abysmal deal when compared to private accounts would be politically sustainable over time.

Social Security is a compact among all Americans designed to ensure a modicum of economic dignity no matter what life may bring.  Much of the value of Social Security lies in its role as insurance against the threat to economic dignity that can come through disability, the early death of a provider, poverty, or living to a very old age and exhausting one’s savings.  One-third of Social Security benefits now go to survivors or workers who have become disabled and their dependents.

Advocates of replacing part of Social Security with private accounts often paint a distorted picture of Social Security’s value by describing it only in terms of its “return on investment.”  No one would think it made sense to tell parents who had purchased auto and fire insurance that they had been terrible investors and had robbed their children of their inheritance because, with no accidents or fires, they had a negative return on their insurance premiums.  That would be a distorted frame for assessing the value of insurance; you hope you never need it, but insurance can make all the difference for a family if life takes a difficult and unexpected turn.

Moreover, most private-account proposals would make Social Security appear to be a worse deal relative to private accounts than would be the case, for another reason as well.  A substantial share of the payroll taxes dedicated to Social Security are used to finance the cost of survivors and disability benefits and of raising benefits for those who worked for low wages throughout their careers.  Any structure that encourages beneficiaries to compare the monthly check they receive from private accounts to the monthly retirement check that Social Security provides thus is likely to lead to serious misunderstanding by workers and beneficiaries of the relative value of the two systems.

The architecture of plans designed to integrate private accounts into the Social Security system, whether by intent or effect, consequently would create a distorted picture of Social Security that ultimately could lead many people to favor measures allowing them to withdraw from Social Security to a greater degree.  These plans thus run the risk of starting the nation down a slippery slope toward a greater weakening of Social Security and its vital social insurance functions.

Social Security has been the crown jewel of U.S. social programs for decades, in no small part because it is a compact not only across the generations but also among all working Americans — the healthy and the middle class as well as those who work for low wages and those who suffer from disabilities.  Unraveling this compact would make ours a very different, and less humane, society.

*  This box is drawn from an April 1, 2005 Memorandum (“Open Letter to Progressive Policymakers”) written by Gene Sperling and issued by the Center for American Progress.

[1] Gene Sperling is a Senior Fellow at the Center for American Progress.  Jason Furman is a non-resident Senior Fellow, and Robert Greenstein is Executive Director, of the Center on Budget and Policy Priorities.