The Census Bureau will release estimates on September 16 of the number and share of Americans without health coverage in 2013, based on its annual Current Population Survey (CPS).  While the CPS is the most widely used source of health coverage information, significant changes in its health coverage questions instituted for 2013 — the result of a multi-year Census initiative to improve the reliability and accuracy of the survey’s health coverage estimates — mean that the 2013 results cannot be compared to those for prior years.  Moreover, because the CPS estimates are for 2013, they will not show the effects of the Affordable Care Act’s (ACA) major coverage expansions, implemented starting in January 2014. 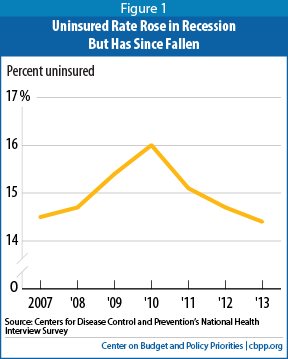 Analysts and policymakers should therefore look to other available data sources as well, including other federal and private surveys.  For example, the Census Bureau also will issue on September 16 the health coverage results from its American Community Survey (ACS).  Unlike the CPS, the ACS health insurance data for 2013 will be a part of a consistent data series back to 2008 and hence will allow analysis of changes in health coverage over recent years.

While the Census Bureau won’t release these data until September 16, preliminary results from the Centers for Disease Control and Prevention’s (CDC) National Health Interview Survey provide important clues about the upcoming Census estimate (under the ACS) of the change in health coverage in 2013.  The CDC data show that the share of Americans without health coverage remained stable between 2012 and 2013, as did rates of private coverage, Medicaid coverage, and coverage for particular groups of Americans.  These data show the uninsured rate as having risen from 14.5 percent in 2007 to 16.0 percent in 2010, then declining to 14.7 percent by 2012, and remaining essentially unchanged (in statistical terms) at 14.4 percent in 2013.

In addition, recent private surveys from the Urban Institute, RAND, the Commonwealth Fund, and Gallup permit preliminary evaluation of the effects of health reform’s coverage expansions thus far in 2014 — specifically, the Medicaid expansion in many states to cover more low-income adults and the availability of subsidies for private marketplace coverage.  All such surveys show that the share of Americans without coverage fell substantially in 2014.  For example, April 2014 results from RAND’s Health Reform Opinion Study show that the share of adults aged 18-64 without insurance fell from 20.5 percent to 15.8 percent between September 2013 and March 2014.  The number of uninsured adults aged 18-64 fell over this period from 40.7 million to 31.4 million.[1]

The health coverage estimates for 2013 based on the Current Population Survey will reflect major changes in the way the survey questions are asked and the measure of coverage they capture.  As single-year estimates for 2013, they will be valuable because of the high quality of the CPS survey design and the CPS’s wealth of additional information on income and demographics.  However, the question changes are significant enough that the 2013 estimates cannot be compared to CPS health coverage estimates for previous years.

Surveys typically ask respondents to indicate their source of coverage either at the time of the interview (known as a “point-in-time” estimate) or over a certain time frame, such as the most recent calendar year (known as an “entire-year” estimate).  As one would expect, these measures produce notably different results.  For example, the share of respondents who are uninsured at the time of the interview will be smaller than the share who were uninsured at some point in the previous year but larger than the share who were uninsured for the entire previous year.  Longitudinal surveys that measure both “point-in-time” and “entire-year” health coverage show that some 25 percent to 50 percent more people are uninsured at some point in the year than over the entire year.[2]

Prior to the 2013 survey data, the CPS asked respondents to report their source of health coverage over the previous calendar year.  The Census Bureau has concluded, however, that the results using these questions reflect some mixture of point-in-time and entire-year estimates due to respondents’ misinterpretation of the question.[3]  For 2013 and future years, therefore, the CPS will instead ask the respondent’s source of coverage at the time of the interview and then ask additional questions to determine changes in that source of coverage over the previous 12 to 15 months (depending on the month in which the interview is conducted).  Thus, the Census Bureau will be able both to produce multiple coverage estimates reflecting different measures (such as both point-in-time and entire-year) and to estimate how long respondents retain a particular source of coverage.

CPS Changes Likely to Result in Lower Estimates of the Uninsured

To estimate the potential impact of the changes in the CPS health coverage questions on the survey results, a survey group separate from respondents to the CPS were asked the new questions last year, and Census analysts compared the results to those for respondents in the CPS sample who had been asked the traditional questions (for 2012). The analysts then attempted to control for differences in these two survey populations.

Under the new survey questions and method, 10.6 percent of Americans were uninsured for the entire previous calendar year (2012), as compared to 12.5 percent using the traditional questions. Also, fewer were enrolled in Medicaid and more were enrolled in private insurance coverage. Based on the new questions, the Census Bureau reported that the share of the population without coverage at the time of the interview was 12.0 percent.

The Census Bureau cautions, however, that these results are instructive, not definitive. The tests of the effects of the new questions compared to the traditional questions were not subject to the same rigorous review standards that apply to the Census Bureau’s published products. In addition, the high non-response rate among those asked the new questions raised concerns. Nevertheless, it seems reasonable to assume that the changes implemented in 2013 will generate a somewhat lower estimate of the number and share of Americans uninsured for the entire previous calendar year than the estimates that the traditional CPS provided.a

While these improvements are welcome, they mean that anyone interested in conducting trend analysis will need to look to other survey results.  Some have alleged that the Obama Administration made this change to make it harder to measure the impact of the Affordable Care Act, but such charges are uninformed.  The Census Bureau has been working on these changes for several years to improve the reliability and accuracy of the CPS health coverage estimates.  Analysts have long maintained that the CPS estimate of the number of uninsured has historically been too high for what the survey purportedly measures — the number of people uninsured for the entire calendar year.  The new approach of asking separately about coverage at the time of the interview and coverage transitions over the course of the year will generate more reliable estimates.

These changes will also strengthen the CPS’ ability to accurately measure the effects of recent changes in health care coverage sources, such as the availability of subsidies to purchase marketplace (or exchange) coverage under the Affordable Care Act.  Census believes that the 2013 CPS data on health coverage will provide an improved baseline for accurately measuring the effects of the 2014 ACA coverage expansions when those data are released a year from now.

It is worth noting that this is not the first “break” in the CPS health insurance data due to survey question changes.  With the 2000 CPS, the Census Bureau introduced a verification question to improve its estimates of people without health coverage, which meant that estimates starting in 1999 could not be compared with those for previous years.

Acknowledging that the changes to the CPS will prevent historical analysis of health insurance coverage, the Census Bureau will release the new American Community Survey health coverage estimates the same day as the CPS estimates.  Because the ACS has not changed its health insurance questions for 2013, the ACS data can be used as a substitute for the CPS in comparing the 2013 results with those for prior years back to 2008, when the ACS first included health insurance questions.

Moreover, the ACS sample population is much larger than the CPS’s.  Over the course of the year, the ACS includes 3 million households (roughly 250,000 each month), whereas about 100,000 households receive the CPS supplement with questions about health coverage.  The expanded ACS sample thus permits more reliable estimates of health coverage for smaller geographic areas (such as counties or congressional districts) and smaller population groups (such as Asian Americans) than does the CPS.

Health coverage results from the two surveys, however, have historically differed.  One reason is that the ACS asks respondents to report their coverage at the time of the survey, whereas the CPS has asked about coverage for the previous full calendar year.  A person who was insured previously in the year but is uninsured at the time of the survey has been identified as uninsured in the ACS but as insured in the CPS.  The revisions in the CPS will remove this source of difference.

Another reason for the differing results is that the CPS includes a verification question (that is, it asks respondents who fail to report a source of health coverage to verify that they indeed are uninsured), while the ACS does not.  The inclusion of a verification question lowers the uninsured rate by slightly more than one percentage point, according to the Census Bureau.

The uninsured rate has historically been 0.6 to 1.0 percentage points lower under the ACS than under the CPS (as noted, the new CPS questions will likely shrink that gap).  This means that the ACS health insurance estimates for 2013 can be compared to prior ACS estimates but not to prior CPS estimates.

Clues About the Forthcoming Data on Health Coverage in 2013

Preliminary results from the Centers for Disease Control and Prevention’s National Health Interview Survey (NHIS) provide clues about the upcoming ACS estimate of the change in health coverage in 2013.  Health insurance coverage remained stable between 2012 and 2013, the NHIS data show: 14.4 percent of Americans were uninsured in 2013 as compared to 14.7 percent in 2012, a difference that is not statistically significant.  Similarly, rates of private coverage, Medicaid coverage, and coverage for particular groups of Americans were stable between 2012 and 2013.[4]

The 2013 NHIS data also show that health coverage rates and sources of coverage continue to differ among various groups of Americans — findings that both the CPS and ACS data will likely reflect:

The upcoming CPS and ACS data will not show the coverage gains in 2014 from the ACA’s Medicaid expansion and subsidized marketplace coverage.  The ACS is conducted throughout the year, and the new results will reflect blended point-in-time coverage estimates for various points in time in calendar year 2013.[6]

The new CPS and ACS data thus will not reflect the current coverage landscape.  However, updated data from four independent surveys are available, and they provide the best gauge of recent changes in coverage.  Each survey indicates that the Medicaid expansion and subsidized marketplace coverage are contributing to substantial reductions in the ranks of the uninsured.

[2] Congressional Budget Office, “How Many People Lack Health Insurance and for How Long?” May 2003, http://www.cbo.gov/sites/default/files/cbofiles/ftpdocs/42xx/doc4210/05-12-uninsured.pdf.

[6] The new CPS health insurance point-in-time question was asked of respondents in February, March, and April 2014, but the Census Bureau will not make those data available in its main report because they have not yet been subject to all of the Census Bureau’s rigorous assessments of the data it collects and will not yet be final.