Sometime early next year, the House of Representatives is expected to vote on the budget reconciliation legislation that the Senate passed on December 21 and the House passed in a slightly different version on December 19. That legislation would make significant cuts in a number of programs serving low- and moderate-income families and individuals, including Medicaid, child support enforcement, and student loans.

Supporters of the legislation defend the cuts as “tough choices” that need to be made because of large and growing budget deficits. These claims are undercut by the fact that, in the last six weeks, the House has passed four tax-cut bills that together cost more than twice what the budget reconciliation bill saves. The claims are further undermined by Congress’s unwillingness to rethink any previously enacted tax cuts as part of its supposed reevaluation of priorities in light of deficits.

In particular, Congress has chosen to allow two tax cuts that exclusively benefit high-income households — primarily millionaires — to begin taking effect on January 1, 2006. By 2010, these tax cuts will eliminate two current provisions of the tax code that limit the value of the personal exemptions and itemized deductions that people at high income levels can take (see box below for more detail). As this analysis explains: 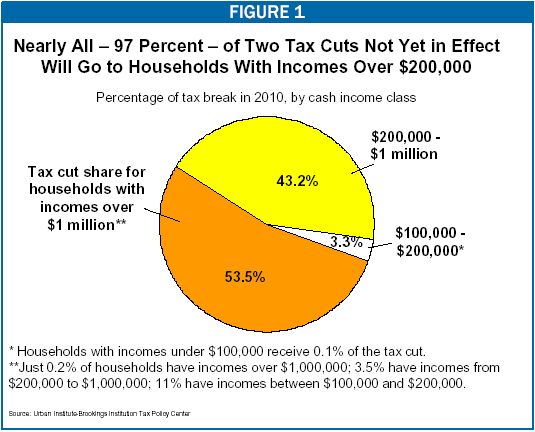 Ironically, the two new tax cuts repeal provisions of the tax code that were originally signed into law by the first President Bush in 1990 to help address troubling budget deficits. Faced with similar deficit worries, the current Congress should reconsider tax cuts targeted to those who least need them, rather than squeezing more dollars from programs that serve the most vulnerable.

The Tax Cuts’ Costs Are Significant and Will Increase Over Time

These two tax-cut measures were enacted in 2001, but do not begin to take effect until 2006 and do not take full effect until 2010. Neither tax cut was proposed by the current President Bush as part of his 2001 tax-cut package. Both were added on Capitol Hill, with implementation postponed until the second half of the decade to keep the total cost of the 2001 tax cut package within prescribed budget limits for the 2002-2011 period.

Even before they take full effect, the tax cuts’ costs are substantial: $27 billion over the first five years (2006-2010), according to the Joint Committee on Taxation. Moreover, because this estimate includes four years in which the tax cuts are not yet fully phased in, it significantly understates the tax cuts’ true long-run costs. If the tax cuts remain in effect from 2010 through 2019, their cost over that ten-year period will be $146 billion. And the cost for the 2010-2019 period rises to $197 billion when the increases in interest payments on the debt these tax cuts will trigger are taken into account.

Furthermore, these estimates are themselves lower than the true cost of the tax cuts, since these estimates assume that Alternative Minimum Tax relief will not be provided in future years, an unrealistic assumption. If AMT relief is provided, more households will be able to take full advantage of these tax cuts, increasing their cost.

Even over the next five years, the costs of these tax cuts are significantly greater than the savings obtained in the same time period from the low-income program cuts contained in the budget reconciliation bill. If Congress were willing to reconsider these tax cuts, it could thus achieve the same or a more favorable effect on the nation’s fiscal problems without harming low-income families.

If the Tax Cuts Take Effect, They Will Be Two of the Most Regressive on Record

While the 2001 tax cuts already in effect are also skewed toward the well-off, the two new tax cuts are particularly regressive. 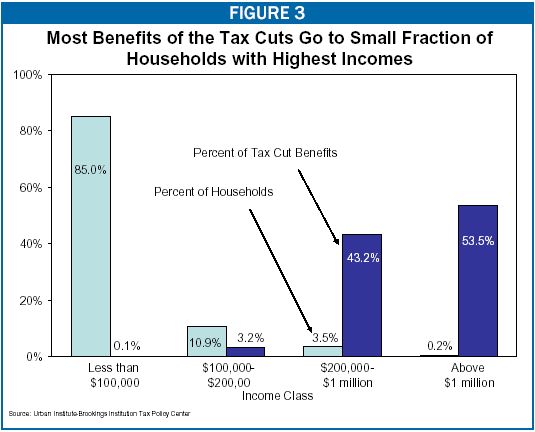 What Are the Two Eliminated Provisions?

The tax cuts gradually eliminate two provisions that were enacted as part of the 1990 deficit-reduction package. The idea behind the provisions was to raise needed revenue by phasing out deductions and exemptions for those who could most afford to lose them.

The Pease provision reduces the value of deductions for those who itemize and have incomes above $145,950 in 2005. The total value of the itemized deductions the taxpayer claims is reduced by 3 percent of the amount by which his or her income exceeds $145,950. Itemized deductions cannot be reduced by more than 80 percent.

The complaint most often levied against the Pease and PEP provisions is that they add to the complexity of the tax code. In fact, complying with Pease and PEP involves a few simple arithmetic calculations. Moreover, to the extent that the provisions do create complexity, they impose it on those households that are typically best able to cope with it: high-income taxpayers who most often have professionals calculate their taxes or use a software package that would automatically handle the Pease and PEP calculations.

The two tax cuts and the budget reconciliation bill program cuts thus present a stark contrast. While supporters of the reconciliation bill claim they are subjecting programs to the careful scrutiny necessitated by budget deficits, they have exempted tax breaks for the well-off from any such evaluation.

It is not too late to change course. Congress is expected to act early in 2006 on other tax measures that expired at the end of 2005, for instance extending relief from the Alternative Minimum Tax. Just as Congress can still enact these other tax changes in January or February and make them retroactive to January 1 without creating significant tax compliance and administration problems, it could still rescind the two tax cuts after the start of the new year. If Congress acts expeditiously, the change could be made well before tax forms have been generated and before significant estimated payments have been made.

Congress could use the funds saved by this step either to eliminate the low-income cuts in the reconciliation package or to reduce the deficit. Either approach would represent a distinct policy improvement.