On July 25, the Treasury Department released a study entitled “A Dynamic Analysis of Permanent Extension of the President’s Tax Relief.”  This study refutes many of the exaggerated claims about the tax cuts that have been made by the President and other senior Administration officials, the Wall Street Journal editorial page, and various other tax-cut advocates.  Contrary to the claim that the tax cuts will have huge impacts on the economy, the Treasury study finds that even under favorable assumptions, making the tax cuts permanent would have a barely perceptible impact on the economy.  Under more realistic assumptions, the Treasury study finds that the tax cuts could even hurt the economy.

In addition, the study casts doubt on claims that the tax cuts are responsible for much of the recent growth in investment and jobs.  It finds that making the tax cuts permanent would lead initially to lower levels of investment, and would result over the longer term in lower levels of employment (i.e., in fewer jobs).

The Treasury also study decisively refutes the President’s claim that “The economic growth fueled by tax relief has helped send our tax revenues soaring,” — in essence, that the tax cuts have more than paid for themselves. [1]  Instead, under the study’s more favorable scenario, the modest economic impact of the tax cuts would offset just 10 percent of the long-run cost of making the tax cuts permanent according to an analysis of the Treasury study by the non-partisan Congressional Research Service (CRS).[2]

Finally, the conclusions in the Treasury study are based on the assumption that the tax cuts will be paid for by deep and unspecified cuts in government programs starting in 2017.  The Treasury study is consistent with other research on dynamic scoring in finding that in the absence of such budget cuts — i.e., if the tax cuts continue to be deficit financed indefinitely — the tax cuts would end up weakening the economy over the long run.

The following are four key findings from the report.

Finding #1: At best, making the tax cuts permanent would have a barely perceptible effect on the economy.

The featured estimate in the Treasury study is that making the tax cuts permanent would add 0.7 percent to the size of the economy over the long run, under the unrealistic assumption that the tax cuts are paid for by deep and unspecified reductions in government programs that start in 2017.  The report does not specify what “long run” means, but if the higher growth rates were spread over 20 years,[3] an ultimate increase of 0.7 percent in the size of the economy would mean an increase of just four one-hundredths of one percent in the average annual growth rate.  For example, instead of average annual growth of 3.0 percent, the economy would have an average annual growth rate of 3.04 percent.  As shown in Figure 1, this difference is so small as to be barely perceptible.

Moreover, the Treasury study acknowledges that the long-run growth rate would not rise at all.  The study indicates that after some period of time (such as 20 years), the barely noticeable, slightly higher annual average growth rate cited above would end, and the rate of economic growth after that would merely be the same as it would be if the tax cuts are allowed to expire. 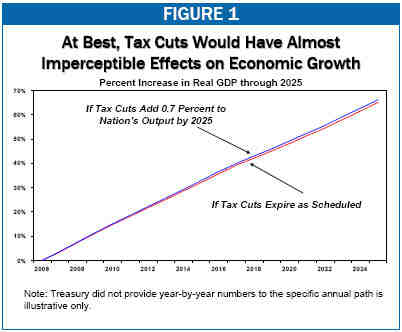 The Treasury study also shows results if alternative assumptions are used regarding the responsiveness of people’s working and saving to changes in taxes.  The study finds that even if people are much more sensitive to tax rates than economists generally assume, the size of the economy would rise, after many years, by only 1.2 percent.  Over 20 years, this is the equivalent of an increase in the average annual growth rate of just six one-hundredths of one percent (i.e., to an annual growth rate of 3.06 percent of GDP instead of 3.0 percent).

Moreover, the CRS study suggests that the Treasury’s base case assumes an unrealistically high level of responsiveness of people’s work and savings decisions to tax rates.  According to CRS “the empirical evidence… actually supports the low case somewhat more.”  In the Treasury’s “low case,” the level of long-run output eventually increases as a result of the tax cuts by a mere 0.1 percent of GDP (rather than by 0.7 percent of GDP), and even this tiny increase is based on the assumption that the costs of the tax cuts are offset by dramatic (and unrealistic) cuts in government programs.

Finding #2: The tax cuts would pay for less than 10 percent of themselves in the long run

The Treasury did not release the findings of its model with regard to the amount of additional revenue that would be generated by the increase in economic growth that the tax cuts are assumed to produce.  But analysis of the Treasury study by the Congressional Research Service finds that if the tax cuts are paid for with dramatic spending cuts, then the economic growth generated by making the tax cuts permanent would offset only 7 percent of the initial cost of the tax cuts and 10 percent of the long-run cost.  The effect would be even smaller with assumptions CRS considers more realistic.

One straightforward way to derive such a revenue estimate is to compare the cost of the tax cuts in the absence of any dynamic effects to the added revenue that would result from the increased level of economic growth the tax cuts are assumed to produce.  According to CBO’s official cost estimate, the Administration’s proposal to make the tax cuts enacted since 2001 permanent would cost 1.4 percent of GDP annually.  (This does not include the relief from the Alternative Minimum Tax that the Administration regularly proposes on an annual basis, which would bring the total cost to 2 percent of GDP.)  The Treasury study finds that the tax cuts would raise national output by “as much as” 0.7 percent over the long term; with tax receipts projected to be about 18 percent of GDP, this translates into an increase in revenues, as a result of greater economic growth, of about 0.13 percent of GDP.

This finding shreds claims that the tax cuts are paying for themselves or offsetting a sizable fraction of their costs.

Finding #3: Tax cuts will benefit the economy modestly only if they are paid for by large and unspecified cuts in government programs.

The featured results in the Treasury study are based on the assumption that government programs are cut sharply starting in 2017 in order to pay for the tax cuts.  In total, government spending would have to be reduced by the equivalent of about 1.3 percent of GDP after 2017.[5]  That would be equivalent to cutting domestic discretionary spending in half.  This is substantially larger than the budget cuts the President has proposed.  Thus, the featured Treasury estimates are estimates of the long-term economic effects not of the tax cuts per se, but of the combination of the tax cuts that the President has proposed and unspecified, deep program cuts that he has not proposed.

Moreover, many low- and middle-income families likely would lose more from the cuts in government programs made under this scenario than they would gain from the combination of the relatively small tax cuts they would get and the slightly expanded economy.6 An analysis conducted in 2004 by the Urban Institute-Brookings Institution Tax Policy Center and the Center on Budget and Policy Priorities found that if the tax cuts were financed through a mechanism that would produce effects similar to those that could occur if the tax cuts were paid for largely or entirely through spending cuts, roughly four-fifths of U.S. households ultimately would lose more from the budget cuts than they would gain from the tax cuts.[6]

The Treasury study does not report how its results would change if alternative scenarios for cutting government spending were used.  Studies of generic tax cuts by Congress’s Joint Committee on Taxation (JCT), the Congressional Budget Office (CBO) and academic researchers all have found that the deficits caused by income-tax cuts can result in a smaller economy over the long run.  The Joint Committee on Taxation, for example, found that income-tax cuts could help the economy if they were paid for after ten years but that waiting 20 years to finance them would result in much more debt and consequently would hurt the economy.[7]  The Treasury study does not present any analysis of what would happen under alternative assumptions about the timing and the specific form of the assumed program cuts. Such analysis might show that the tax cuts could hurt the economy.

Finally, the Treasury study also estimates that if the tax cuts are financed by income-tax increases, they will reduce long-run national output by 0.9 percent.  Since the drastic cuts in programs that the Treasury assumes in its “favorable” scenario are unlikely to materialize, under a more realistic scenario that relies on a combination of program cuts and tax increases, the economy would be little affected and could even be hurt.

Finding #4: The Treasury study confirms that it is more prudent to raise taxes by a smaller amount today than to raise them by a larger amount in the future

The Treasury study confirms this finding.  Specifically, it finds that cutting taxes today and raising them by even more in the future to make up for the lost revenue and the larger deficits ultimately would reduce the size of the economy (real GNP) by 0.9 percent.  In other words, the Treasury analysis finds that if one does not expect dramatic reductions in government programs to be instituted to pay for the tax cuts, it would be better for the economy to let the tax cuts expire.

This is consistent with the commonsense prescription:  in preparing for our future fiscal challenges, it is better for the economy to have slightly higher taxes today (by letting some or all of the tax cuts expire) than to wait a long time and have to raise taxes dramatically in the future.  Similarly, it would generally be preferable to make more modest program reductions today than to make larger program cuts in the future.

[3]  According to Treasury officials, about two-thirds of the ultimate 0.7 percent increase in the Gross National Product would occur by 2016.

[4] The Treasury study does not include the economic impact of repealing the estate tax. Including it could result in a long-run “dynamic effect” that is slightly different. Economic theory does not have a clear prediction about whether the economic impact of estate tax repeal is positive or negative. Treasury appears to acknowledge this in its study, where it notes, “There is considerable uncertainty regarding the likely behavioral responses to repealing the estate tax.” Moreover, Treasury’s dynamic scoring model assumes a “target bequest motive.” Under that theory, estate tax repeal would likely cause people to save less — reducing long-run output and magnifying the cost of the tax cuts — because they would not need to set aside as much money to leave the desired amount to their heirs.

[5] Treasury assumes that the government spending reduction would be sufficient to stabilize the debt-to-GDP ratio at its 2017 value.  As a result, spending reductions would have to total about 1.3 percent of GDP in present value terms, the equivalent of the cost of making the tax cuts permanent after accounting for dynamic feedback and ignoring the costs of extending relief from the AMT.

[6] See William G. Gale, Peter R. Orszag, and Isaac Shapiro, “The Ultimate Burden of the Tax Cuts,” Urban Institute-Brookings Institution Tax Policy Center and the Center on Budget and Policy Priorities, June 2, 2004.  This analysis examined the relative effects of the 2001 and 2003 tax cuts and a measure to offset the tax cuts’ cost through budget cuts spread evenly across the U.S. population.  The analysis did not attempt to estimate economic effects of the tax cuts.