Too Little to Go Around

The House Appropriations Committee’s plan to apportion discretionary funding for fiscal year 2014 among its 12 appropriations subcommittees — which it approved on a May 21 party-line vote — would override a key provision of the 2011 Budget Control Act (BCA) and shift tens of billions of dollars from domestic programs to defense and other security programs.

The plan, crafted by Chairman Harold Rogers, largely reflects the priorities in the House-passed budget resolution of March.  Total discretionary funding under the Rogers plan would equal the total amount that the BCA allows in 2014 if the sequestration budget cuts remain in effect.[1]  But defense would receive substantially more funding —and non-defense programs would receive substantially less — than the BCA allows under sequestration.

Thus, the Rogers plan makes clear that if overall discretionary funding remains at the post-sequestration level in 2014, action by policymakers to protect funding in one major area — like defense — will require much deeper cuts in other areas.  In short, the fundamental problem is that the overall funding level for discretionary programs under sequestration is too low.

A far better approach than the Rogers plan would be to replace sequestration with a balanced package of spending cuts and revenue increases and fund discretionary programs at the BCA levels for 2014 without sequestration.  The President’s budget and the Senate-passed budget resolution both take this approach.  A broader budget agreement — not the implementation of sequestration — is what the President and Congress envisioned when they enacted the BCA.

Under the Rogers plan, the bill covering the Departments of Education, Health and Human Services, and Labor would cut funding for these departments nearly 20 percent below the 2013 level under sequestration.  The bills funding the Interior Department, the Environmental Protection Agency, and the State Department would cut funding 14 percent below the 2013 post-sequestration level.  (See Figure 1.)  These reductions are in nominal terms; once inflation is taken into account, the reductions are still larger.

The fact that the Rogers plan’s cuts in domestic programs are much deeper than those already occurring under sequestration in 2013 is particularly striking given that the current cuts are causing significant reductions in public services and delays in key public investments and are affecting everything from medical research to weather forecasting to Head Start to Meals on Wheels. 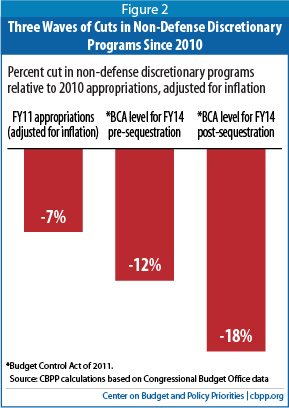 The Rogers proposal would add large new cuts on top of the first three waves of already-deep reductions.  The overall impact would be remarkable.  For example, under the Rogers plan, total 2014 appropriations for education, health and human services programs, employment, job training, and other Labor Department programs would be roughly 30 percent below the 2010 level, adjusted for inflation.

However, funding for defense — even with the increases Chairman Rogers provides — is still a few billion dollars below the level called for in the House-passed budget, as well as in the President’s budget and the Senate-passed budget.

Chairman Rogers himself may not believe that the overall funding that his plan provides for defense and non-defense discretionary programs for 2014 represents sound policy.  He stated in announcing the allocations:  “It is my sincere hope that the House and Senate can come together on  a sustainable budget compromise to replace sequestration and establish a responsible, single House and Senate top line discretionary budget number.”[4]

Under the BCA, overall discretionary funding for 2014 is capped at $1.058 trillion.  Sequestration lowers that total by $91 billion, to $967 billion[5] — nearly 2 percent below the post-sequestration 2013 funding level.

The BCA sets separate caps for defense and non-defense discretionary funding that, when combined, equal the overall discretionary cap.  The Rogers plan adheres to the $967 billion overall post-sequestration cap level for 2014 but likely exceeds the defense cap by $45 billion or more.[6]  It offsets this breach by cutting non-defense discretionary funding below the non-defense cap by a like amount.  Thus, although Chairman Rogers stated that “This is the hand that sequestration has dealt us, and we have no choice but to try and make the best of what we have,” his allocations change the hand he was dealt, shifting tens of billions of dollars from non-defense programs to defense.

As Table 1 shows, the Rogers plan includes the following:

Indeed, policymakers never intended sequestration to go into effect — it was a “stick” designed to force the “supercommittee” and Congress to agree on a deficit-reduction plan.  Thus, in some respects, the 2013 funding levels in the final appropriations bill before sequestration reflect Congress’s preferred funding levels under the BCA.  If one compares the Rogers plan to the 2013 pre-sequestration funding levels, his domestic program cuts are still more dramatic, totaling 22 percent for the Departments of Labor, Health and Human Services, and Education; 18 percent for environmental programs and the Department of Interior; and 18 percent for the State Department and other (non-military) foreign operations, even before inflation is taken into account.

Even so, the size of the non-defense cuts in the Rogers plan appears to be raising concerns among some House Republicans.  Several, including Chairman Rogers, were quoted when these allocations were approved as stating that the domestic cuts under the Rogers plan would be difficult to pass and could have negative real-world consequences.  Chairman Rogers reiterated that sequestration should be replaced, saying, “It needs to be done in the very near term so that these types of devastating cuts do not carry forward into the next fiscal year.”[8]   Rep. Tom Cole (R-OK) noted, “Some people seem to think that there’s so much that can be cut but it won’t have any impact on national parks or on federal employment in my area or on my military installations. . . .  Some of them will be very happy with it, until it shows up in their district.”[9]

The President’s budget and the Senate budget resolution can provide more funding for both defense and non-defense programs than the Rogers plan because they would replace sequestration with a more balanced package that contains other spending cuts and revenue increases.

The estimates for fiscal year 2013 appropriations levels are more complicated than in normal years because of the rules related to the Budget Control Act’s statutory caps and to sequestration.  This appendix explains the 2013 estimates that we use in this analysis.

Table 3 below begins with the final appropriations for 2013 (provided in H.R. 933), as scored by the Congressional Budget Office.[11]   CBO estimated that the bill totaled $1,043.0 billion in budget authority and complied with the BCA’s security and non-security caps for 2013,[12] prior to sequestration.  Compliance with the caps, however, is determined by OMB.  So, H.R. 933 included a section that allowed OMB, if it estimated that the legislated amounts exceeded the caps, to impose across-the-board cuts to bring security and non-security funding down to the capped levels.

In addition, since its original scoring of the bill, CBO has reestimated some of the non-defense discretionary programs that are open-ended, meaning that their cost depends in part on external factors such as the amount of receipts they collect.  In particular, it now estimates that receipts for 2013 from the housing loan guarantee programs run by the Federal Housing Administration and the Government National Mortgage Association will be several billion dollars higher than it earlier expected, which reduces net non-defense budget authority in 2013.

When the above factors — OMB’s across-the-board reductions and CBO’s reestimates — are taken into account, total discretionary funding for 2013 is $1,037.8 billion, prior to sequestration.

Sequestration then reduced this amount by $55.5 billion, bringing total discretionary funding for 2013 down to $982.4 billion.[13]   (There are two reasons why the $55.5 billion reduction is smaller than the full $85.3 billion sequestration OMB ordered on March 1.  First, the OMB sequestration includes cuts to mandatory programs and to certain discretionary funding — for war, program integrity, disaster, or emergency — that are not included in the totals discussed here or displayed in the table.  Second, the discretionary sequestration was reduced by $3.7 billion in defense and $1.2 billion in non-defense programs due to the “crediting” rule.  Under the crediting rule, budget accounts that were funded at a lower level in the final appropriations bill than in the continuing resolution as reduced by sequestration receive a smaller reduction when sequestration was re-applied to the final appropriations bill.)

In particular, CBO estimates that receipts from the housing loan guarantee programs will be nearly $4 billion lower in 2014 than in 2013; this leaves less room under the caps in 2014 for other non-defense programs than if the receipts stayed at the higher 2013 level.[15]

Similarly, the 2013 levels may reflect one-time measures that were used to meet the 2013 caps but that may not be fully repeatable in 2014.  This can include, for example, so-called “CHIMPs,” i.e., changes in mandatory programs that are made in appropriations bills.

Further, there can be differences between CBO estimates (which we rely on for this analysis) and OMB estimates (which are used to determine compliance with caps) that can ultimately affect the total amount of funds available under the caps.

As a result of these various factors, the small increase between 2013 and 2014 that the table shows for non-defense funding is much more likely an artifact of technical estimating rules than an actual increase in available resources for these programs.

[2] Each year, CBO constructs a baseline based on the funding provided for that year.  For example, after the 2010 appropriations were completed, CBO constructed a baseline showing the funding required to maintain the 2010 level of services in each future year.  We use these CBO baselines to compare funding levels in 2010, 2011, and under the 2014 caps in 2014 dollars.

[3] The 2010 level does not reflect the temporary funding provided by the Recovery Act, which increased 2009 appropriations but was not part of 2010 appropriations.

[5] In February the Congressional Budget Office (CBO) estimated that sequestration would lower the total discretionary cap for 2014 to $966.4 billion; that amount was included in the House-passed budget resolution.  On April 10 the Office of Management and Budget) OMB, which is by law in charge of the official estimates of the caps, published a figure of $966.9 billion, and on May 20 OMB corrected that figure (after finding some technical errors) to $967.5 billion, which therefore constitutes the legally binding total.  The Rogers 302(b) allocations were based on the now-outdated $966.9 billion figure.

[7] Although Table 1 shows that funding for the Transportation-HUD bill in the Rogers plan is 1.6 percent above the 2013 level after sequestration, that figure is misleading because of substantial changes from 2013 to 2014 in the estimated amount of receipts from the housing loan guarantee programs run by the Federal Housing Administration (FHA) and the Government National Mortgage Association (GNMA).  FHA and GNMA receipts, which serve as budgetary offsets that reduce the net funding level in the bill, are projected to be $3.7 billion lower in 2014 than in 2013, thereby distorting the comparison between the two years.  When these receipts are removed from the bill totals in order to provide an apples-to-apples comparison and convey a more accurate picture of how the remaining HUD and Transportation programs would fare (as shown in the note on Table 1), then the funding for the rest of HUD and the Department of Transportation declines by 5.1 percent between the 2013 post-sequestration level and the 2014 level in the Rogers plan.

[11] CBO’s estimate of $1,043.0 billion includes savings of $18.6 billion through changes in mandatory programs (CHIMPs), in line with established scorekeeping rules that treat these spending changes as discretionary for the purpose of evaluating compliance with budget targets.  CBO’s May report has “rebased” the CHIMP savings and so now counts them as mandatory rather than discretionary; for that reason, CBO’s backup data shows total discretionary funding at $1001.0 billion for 2013, $18.6 billion higher than the $982.4 billion figure we use here.  We include the CHIMP savings in the totals for ease of comparison with the 2014 caps because similar CHIMP savings will surely be used to comply with the 2014 caps.

[13] If the 2013 sequestration is first subtracted from CBO’s scored total of $1,043 billion for 2013 appropriations, the resulting total is $988 billion — the figure that CBO mentions in footnote (a) of Table 3 in its May 2013 baseline report.  OMB’s across-the-board cuts and CBO’s reestimates would then reduce the final total to $982.4 billion.