The Slowdown In Medicaid Expenditure Growth

It is sometimes claimed that Medicaid expenditures are “out of control.” A careful analysis of recent data and projections indicates, however, that Medicaid growth has slowed considerably in the last year or so, even before the enactment of the Deficit Reduction Act of 2005. Both the Administration and the Congressional Budget Office have recently lowered their projections of future Medicaid expenditures.

Moreover, Medicaid outlays through December 2005 indicate that federal expenditures in the first three months of fiscal year 2006 were only 3.6 percent higher than in the first three months of the prior year.[2] The Medicare drug benefit began in January and Medicaid growth is falling further now because the cost of prescription drugs for “dual eligibles” — people enrolled in both Medicaid and Medicare — is shifting from Medicaid to Medicare. The Federal Funds Information Service, a joint program of the National Governors Association and the National Conference of State Legislators, recently noted that expenditures for the first five months of fiscal year 2006 — through February 2006 — were just 1.8 percent higher than in the first five months of last year.[3] (Drug costs for dual eligibles previously constituted roughly half of all Medicaid prescription drug costs.) Since Medicaid is based on federal matching of state expenditures, the federal trends imply that average state Medicaid expenditures also are growing more slowly in fiscal year 2006. Some states, of course, grow faster than average, while others grow more slowly than average.

Expenditures currently are growing more slowly in Medicaid than in Medicare. Medicare outlays reported by the Department of Treasury were 6.9 percent higher in the first five months of fiscal year 2006 than in the comparable period of 2005, without including the additional costs of the new Medicare drug benefits.

It is too early to know all the reasons for this marked slowdown in Medicaid expenditures. Some plausible factors include: 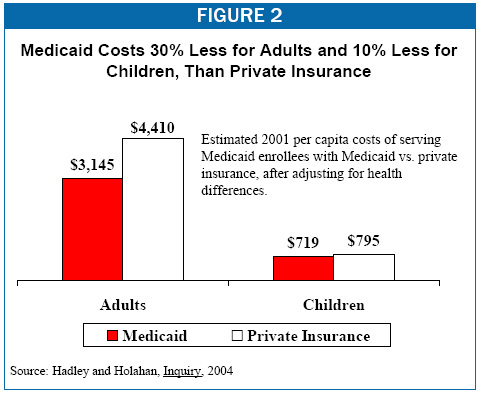 Both the Congressional Budget Office (CBO) and the Administration have lowered their multi-year projections of federal Medicaid expenditures substantially since last year (Table 1). 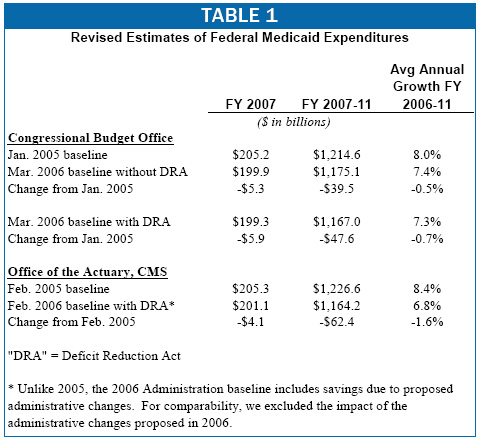 The Administration’s projections of Medicaid expenditures fell more, by $62 billion over five years, or five percent. This estimate includes both technical revisions and the estimated effects of the Deficit Reduction Act.

There has been a significant slowdown in Medicaid expenditure growth. Medicaid expenditures grew rapidly earlier in the decade. That growth occurred when the economy was weak, needs were high and health care costs were surging. The responsiveness of the Medicaid program during the downturn helped keep millions of low-income Americans insured at a time when private insurance coverage was receding and poverty was rising. In 2005 and so far in 2006, by contrast, Medicaid expenditure growth has ebbed to its lowest level in more than a decade.

[1] The federal Medicaid growth rate in 2005 was temporarily lowered because fiscal relief provided $6 billion in extra federal funding in fiscal year 2004. If we adjust for this temporary change, total (federal plus state) Medicaid expenditures in fiscal year 2005 rose a comparatively modest 6.7 percent.

[2] Based on monthly data about the amount states draw down from the U.S. Treasury for Medicaid.

[7] Hurricane Katrina may have a modest effect. According to data from CMS’ State Payment Management System, Medicaid drawdowns for Louisiana and Mississippi are lower so far this year than last year, probably because large numbers of people evacuated and many health care facilities were shuttered. But these reductions were largely offset by higher drawdowns in Texas and some other states that received evacuees. The Deficit Reduction Act provides additional federal funds to help cover state expenditures for certain Katrina-related Medicaid costs.