The Skewed Benefits of the Tax Cuts: With the Tax Cuts Extended, Top 1 Percent of Households Would Receive Almost $1.2 Trillion in Tax Benefits Over the Next Decade

Under current law, nearly all provisions of the 2001 and 2003 tax cuts are scheduled to expire at the end of 2010. The President’s budget calls for making these tax cuts permanent.

The enacted tax cuts and their extension carry a high cost. This raises the question: how would the large sums involved be distributed among different income groups?

The Urban Institute-Brookings Institution Tax Policy Center has produced estimates of how the benefits of the income and estate tax reductions enacted in 2001 and 2003 will be distributed among households at different income levels in coming years, if these tax cuts are extended. (The estimates assume that relief from the Alternative Minimum Tax is continued. Without extension of AMT relief, the AMT would cancel out a substantial portion of the 2001 and 2003 tax cuts; see the discussion below.)

Estimates from the Congressional Budget Office and the Joint Committee on Taxation indicate that the cost of the tax-cut provisions the Tax Policy Center has analyzed would be $3.8 trillion over the 2009-2018 period, if these provisions are extended. Applying the Tax Policy Center estimates of the share of the tax cuts that would go to each income group to the CBO/Joint Tax Committee estimates of the tax cuts’ cost shows:

Fiscal year 2012 is the first year in which the costs of choosing to extend the 2001 and 2003 tax cuts would be fully felt. It is informative to consider how the benefits of the tax cuts would be distributed in that year.

Moreover, these estimates, which show all groups of households receiving at least some small benefit from the tax cuts, do not take into account the fact that the tax cuts ultimately must be paid for. As former Federal Reserve Chairman Alan Greenspan has warned, “If you’re going to lower taxes, you shouldn’t be borrowing essentially the tax cut… [T]hat over the long run is not a stable fiscal situation.”[1] Tax Policy Center data indicate that, even if the enacted tax cuts and their extension eventually were paid for through a balanced package of program cuts and progressive tax increases (rather than solely through benefit cuts), the bottom four fifths of households would likely lose, on average, from the combination of the tax cuts and the measures needed to finance them.[2] That is, once the need to pay for the tax cuts is taken into account, the 2001 and 2003 “tax cuts” are best seen as net tax cuts for the top 20 percent of households, as a group, financed by net tax increases or benefit reductions for the remaining 80 percent of households, as a group.

Putting the Cost of the Tax Cuts in Context

When the tax cuts are fully in effect, the cost of the tax cuts going to the very highest income households will be greater, in today’s terms, than the amounts spent on various high-priority programs. 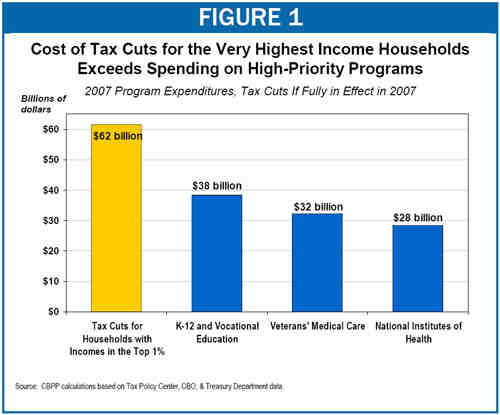 The President’s budget proposes to make permanent the tax cuts enacted in 2001 and 2003. At the same time, the President has proposed substantial cuts to domestic programs in each of the next five years. In 2009, the President’s budget would cut funding for non-defense non-entitlement programs by about $7 billion; the proposed cuts include reductions in education programs, health research, environmental programs, and others. In 2009, the cost of tax cuts for households with incomes above $1 million will be $51 billion (see Figure 2) — about seven times the size of the savings the President’s proposed cuts to domestic discretionary programs will produce.

This appendix provides a more detailed explanation of the methodology used in this analysis and of our treatment of the Alternative Minimum Tax. It also discusses some of the issues surrounding multi-year distributional estimates. Finally, it provides tables showing the year-by-year distribution of the tax cuts.

This analysis examines the distribution of the individual income tax and estate tax cuts enacted in 2001 and 2003 and associated Alternative Minimum Tax relief. (See below for a discussion of the AMT.) The Congressional Budget Office and the Joint Committee on Taxation have provided estimates of the cost of these tax cuts and their extension, and the Tax Policy Center has issued estimates of the distribution of the benefits of these provisions. We apply the Tax Policy Center’s distributional estimates to the cost estimates provided by CBO and the Joint Tax Committee.[3]

For 2011, we take the average of the 2010 and 2012 tax cut shares going to each income group. Similarly, for the years 2013-2016, we smooth the change between the 2012 and 2017 distributional estimates; that is, we change the percentage share going to each group in each of these years by one fifth of the total change in that group’s share of the tax cuts between 2012 and 2017 (we apply the same percentage change to compute estimates for 2018). This method approximates the likely changes in the actual distribution over time, which would be steady and gradual (and largely reflect real income growth) once all the tax cut provisions were fully in effect.

Our Treatment of the Alternative Minimum Tax

The figures presented in this analysis are estimates of the benefits that the 2001 and 2003 tax cuts and their extension would provide to various income groups, assuming that the Alternative Minimum Tax relief that expired at the end of 2007 were extended.

The available evidence suggests, however, that most households do not experience dramatic income shifts over the course of a decade. For example, a study that examined economic mobility over the course of the 1990s found that slightly more than half of those households that were in the bottom or top quintiles of the income scale at the beginning of the decade were in that same quintile at the end of the decade, and about three-quarters were in either the same or the next quintile.[5] Another study, by the Congressional Budget Office, compared distributional estimates of tax cuts based on annual measures of income with estimates based on multi-year measures. It concluded that “the choice of either a longitudinal or an annual metric to measure a potential policy’s effects would not dramatically shift the overall distribution of any of the changes CBO examined.” [6] A study by economists in the Treasury Department’s Office of Tax Analysis found similar results.[7]

[2] See William Gale, Peter Orszag, and Isaac Shapiro, “The Ultimate Burden of the Tax Cuts:  Once the Tax Cuts Are Paid for, Low- and Middle-Income Households Likely to Be Net Losers, on Average,” Center on Budget and Policy Priorities, June 2, 2004.

[3] The Tax Policy Center’s distributional estimates are for calendar years, while the CBO and Joint Tax Committee cost estimates are for fiscal years.  This discrepancy should have only a very small effect on our estimates.

[4] In addition, the estimates exclude the business tax cuts enacted in 2001 and 2003, such as Section 179 expensing, and also exclude several small provisions of the 2001 and 2003 tax cuts that were not included in the Tax Policy Center’s distributional estimates, such as the education-related tax cuts.