The Supplemental Nutrition Assistance Program’s (SNAP) primary purpose is to increase the food purchasing power of eligible low-income households in order to improve their nutrition and alleviate hunger and malnutrition.[1]   The program’s success in meeting this core goal has been well documented.[2]   Less well understood is the fact that the program has become quite effective in supporting work and that its performance in this area has improved substantially in recent years.

The number of SNAP households that have earnings while participating in SNAP has been rising for more than a decade, and has more than tripled — from about 2 million in 2000 to about 6.4 million in 2011.  (See Figure 2.)  The increase was especially pronounced during the recent deep recession, suggesting that many people have turned to SNAP because of under-employment — for example, when one wage-earner in a two-parent family lost a job, when a worker’s hours were cut, or when a worker turned to a lower-paying job after being laid off.

The data also indicate that SNAP receipt does not create work disincentives.  The overwhelming majority of non-disabled, working-age households that start receiving SNAP do not stop working.  In the mid-2000s, only 4 percent of SNAP households that worked in the year before starting to receive SNAP did not work in the following year.[4]   (See Figure 4.)

SNAP Is Designed to Support Work

The high labor force participation rate among SNAP recipients is not accidental — SNAP is designed to act both as a safety net for people who are elderly, disabled, or temporarily unemployed and to supplement the wages of low-income workers.

SNAP’s Effectiveness in Serving Workers a Focus in Recent Years

SNAP’s performance in reaching eligible working households has improved over the past decade as a result of bipartisan efforts at the federal, state, and local levels to respond to previous weaknesses in this area.  The efforts have paid off, with estimated participation rates (i.e., the portion of eligible households that actually receives benefits) hitting highs in recent years; the SNAP participation rate among eligible low-income working families, which fell after enactment of the 1996 welfare law (although that was not what the authors of the law intended), rose from 43 percent in 2002 to about 65 percent in 2010.  (See Figure 5.) 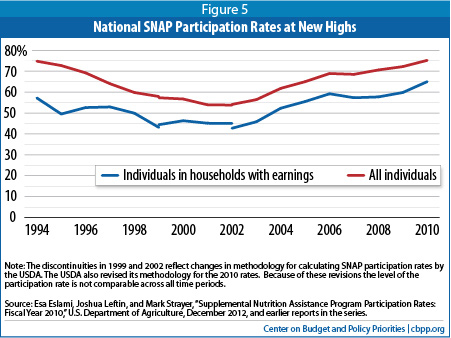 Click here to view a PDF of the full report

[3] The figures are based on data from the Survey of Income and Program Participation (SIPP) for the mid-2000s, before the recent recession, but preliminary analysis finds that they declined only modestly during the recession.  For this analysis SNAP household members are considered to be working-age if they are age 18 through 59 and are disabled if they receive a disability-based benefit, such as Social Security or Supplemental Security Income (SSI).

[4] The sample sizes for this analysis are small so the results should be viewed with caution, but they strongly indicate that SNAP does not cause people to leave the labor force.