The President's Budget: A Preliminary Analysis

An administration’s budget is a statement of its priorities.  This budget’s priorities are clear: it features cuts in numerous domestic programs that serve low- and middle-income families alongside continued — and substantially expanded — tax cuts of very large size that concentrate their benefits on people high on the income scale.  The new budget also contains continual significant increases in defense and homeland security spending.

This analysis assesses the President’s budget on three basic criteria — fiscal responsibility, fairness and balance (i.e., does it call for shared sacrifice?), and the degree to which it is transparent (does it conceal or omit basic budget information or resort to budget gimmickry?).  This analysis indicates that the budget falls well short on all three standards.

Is the Budget Fiscally Responsible?

The Administration’s budget would increase the deficit over both the short run and the long run.  The budget proposes significant reductions in a broad array of domestic programs, but those reductions would not be used to reduce the deficit.  Instead, they would be used to offset a fraction of the costs of the tax cuts the President proposes.  Since the tax cuts and the defense and homeland security increases the President is proposing would cost substantially more than his domestic program cuts would save, the net effect of the new budget would be to make deficits larger than they otherwise would be.

A standard part of the President’s budget each year is a summary table that shows the impact of the Administration’s proposed policies on the deficit.  (See Table S-12 on page 364 of last year’s budget.)  This year, however, the Administration has eliminated that table from its budget publications, presumably to deflect attention from the deficit-increasing impact of its proposals.  (The impact of the budget’s proposals on the deficit can be constructed from data in the budget and accompanying Administration budget information, which is what we have done.)

The budget would cause even larger increases in deficits outside the five-year budget window.  The budget fails to provide numbers for revenues, expenditures, and deficits for years after fiscal year 2011, an omission that masks the budget’s large effects in swelling long-term deficits.  The Administration proposes to make its tax cuts permanent.  Since most of the current tax cuts are in effect through 2010, the overwhelming bulk of the cost of making the tax cuts permanent would occur outside the five-year budget period.

Even these figures for 2011 significantly understate the long-term effect the President’s budget would have in swelling the deficit.  Several of the additional tax cuts the Administration is proposing — including costly proposals related to health savings accounts and to retirement and lifetime savings accounts — are designed such that their costs in the first five or ten years would be substantially smaller than their costs in subsequent decades, when they would lose huge amounts of revenue.  The budget shows the Administration’s Health Savings Accounts proposals would cost a whopping $156 billion over the first ten years, but the costs would be even higher in subsequent ten-year periods.  In addition, past analyses by the Congressional Research Service have estimated that the Administration’s retirement and lifetime savings account proposals would ultimately cost $300 billion to $500 billion per decade (measured in today’s dollars).

In short, the budget would make the nation’s looming long-term budget problems even more serious than they already are and continue to “dig the hole deeper.”

Is the Budget Fair and Balanced?

Although the fiscal consequences of the tax cuts enacted in recent years are becoming increasingly apparent, the Administration has responded not by reassessing any of those tax cuts, but by proposing sharp cuts in many domestic programs, alongside an array of costly new tax breaks.  The tax cuts would favor the most well-off, while the program cuts would primarily affect low- and middle-income Americans.

Although the budget includes significant domestic program reductions, they would be heavily outweighed by the tax cuts.

Eventually, the costs of these very generous tax cuts would have to be offset.  To the extent that the tax cuts ultimately were financed by still larger cuts in domestic programs or by tax increases broadly spread across the population, the end result would be a shift in resources from poor and average Americans to those who already are the most well-off.

Is the Budget Honest and Transparent?

The budget conceals or omits information essential to assessing its impacts on deficits and on programs and services that affect millions of Americans.

Unfortunately, this budget fails the tests of fiscal responsibility, fairness and balance, and transparency.  The nation and its policymakers can do better.

APPENDIX: What Caused Deficits to Return?

Similarly, data that the Office of Management and Budget released in conjunction with the budget shows that increases in domestic discretionary, international, and entitlement spending (including the prescription drug benefit) account for only 28 percent of the cost in 2006 of legislation enacted since January 2001.  Tax cuts account for 36 percent of the cost of that legislation, with the remaining 35 percent attributable to increased funding for defense and homeland security.

Although increased spending for domestic programs has played a relatively modest role in the return of deficits since President Bush took office, the President’s budget puts virtually the entire burden of budget-tightening on those programs.

The baseline used here is the Administration’s current services baseline, adjusted to remove the effect of making the 2001 and 2003 tax cuts permanent.  (The Administration includes in its baseline the costs of its proposal to make the tax cuts permanent, in order to make that proposal appear costless.)  The Administration’s baseline — and the baseline used here — do not assume any future supplemental appropriations for operations in Iraq and Afghanistan or for domestic emergencies.  To avoid overstating the impact of the President’s proposals on the deficit, expenditures from emergency funding that the President is requesting for 2006 and 2007 have been excluded from the calculations here.

[2] These figures, from the Treasury Department publication “General Explanations of the Administration’s Fiscal Year 2007 Revenue Proposals,” include both revenue and outlay effects of the tax proposals. 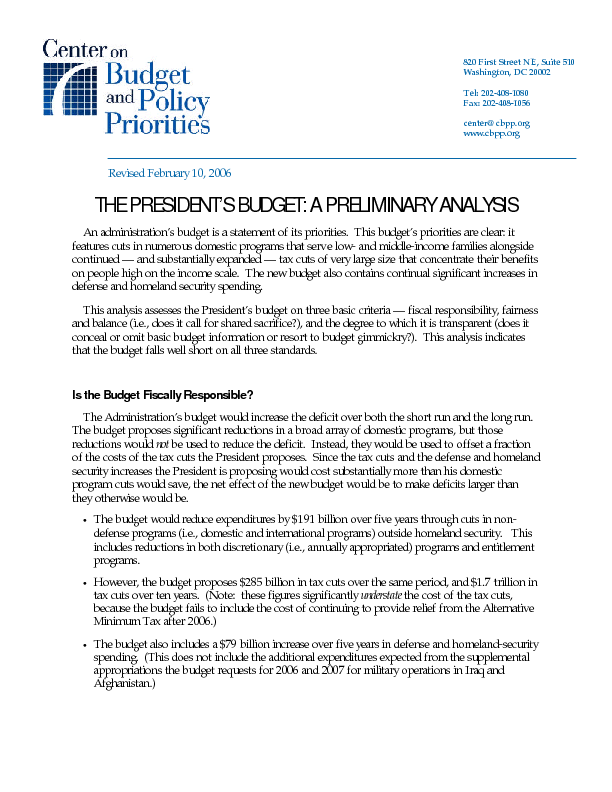