The Number of Uninsured Americans Is At An All-Time High

Data released today by the Census Bureau show that the number of uninsured Americans stood at a record 46.6 million in 2005, with 15.9 percent of Americans lacking health coverage. “The number of uninsured Americans reached an all-time high in 2005,” said Robert Greenstein, executive director of the Center on Budget and Policy Priorities. “It is sobering that 5.4 million more people lacked health insurance in 2005 than in the recession year of 2001, primarily because of the erosion of employer-based insurance.”

“The increase of 360,000 in the number of uninsured children is particularly troublesome,” Greenstein said. “Since 1998, the percentage of uninsured children has been dropping steadily, from a high of 15.4 percent to 10.8 percent in 2004. The new Census data show that the uninsured rate among children moved in the wrong direction in 2005, rising to 11.2 percent.”

Greenstein warned that matters could get worse. In fiscal year 2007, which begins October 1, children’s health insurance programs in 17 states face federal funding shortfalls totaling an estimated $800 million, equal to the cost of covering more than 500,000 low-income children. Congress has known about the shortfall since early February, when the Administration took note of it and proposed a measure to address it, but Congress has so far failed to act.

“Unless Congress takes action this year to avert the impending shortfall,” Greenstein said, “the increase in the number of children without health coverage is likely to accelerate in the year ahead.”

The percentage of Americans with private health insurance declined to 67.7 percent in 2005, marking a pattern of erosion for the past several years. A new research study by Jack Hadley, a health economist at the Urban Institute, found that the main reason that adults’ private insurance coverage has faded in recent years is that the costs of insurance premiums have climbed, making coverage less affordable for employers and employees alike. Hadley also found that rising private insurance premiums have led to higher Medicaid enrollment of adults, as low-income workers are squeezed out of private coverage and into Medicaid.[3] Data from the Kaiser Family Foundation show that, on average, employers are requiring employees to contribute more in cost-sharing (i.e., premiums, deductibles, and/or copayments) for their health insurance and that fewer small businesses are offering health coverage.[4]

The Census data also show that individually-purchased health insurance, a small component of the overall private insurance market, has been essentially stagnant. In 2005, the percentage of people covered by such policies was 9.1 percent, a figure largely unchanged over the past several years. The individual market continues to suffer from significant problems. Older individuals and people in poorer health may be unable to afford coverage in the individual market, as coverage may be offered to them at very high prices, or they may be excluded entirely, due to the use of medical “underwriting” (i.e., the use of practices by which private insurance companies charge higher premiums, or fail to offer coverage at all, to individuals who are sicker and likely to incur higher health care costs).[5]

Changes in Medicaid and SCHIP Coverage

The number of Americans covered through either Medicaid or the State Children’s Health Insurance Program (SCHIP) remained about the same in 2005 (38.1 million) as in 2004 (38.0 million). Among children under 18, the number covered appeared slightly lower (19.7 million) in 2005 than in 2004 (19.9 million), but these differences may not be statistically significant.[6]

Over a modestly longer horizon — from 2001 to 2005 — Medicaid and SCHIP enrollment climbed from 11.2 percent of Americans to 13.0 percent. These increases helped to offset the reductions in employer-based coverage and kept the number of uninsured people from rising faster. Enrollment in these programs did not climb because of eligibility expansions; some states initiated Medicaid or SCHIP eligibility expansions in this period, but others scaled back eligibility.[7] Enrollment in the public programs rose because of the increase since 2001 in the number of people who are poor and the reduction in the number with employer-based health insurance.

Unlike Medicaid, an entitlement program in which the federal funding provided to states rises or falls as states’ needs expand or contract, the SCHIP program is a block grant with capped federal funding. Current projections by the Congressional Research Service, the Department of Health and Human Services, and the Center on Budget and Policy Priorities indicate that federal funding for SCHIP will not meet current needs in at least 17 states in fiscal year 2007, which starts October 1. These states are projected to face federal funding shortfalls totaling an estimated $800 million to $950 million, an amount equal to the federal share of the cost of insuring about 530,000 children.[8] (The 17 states are: Alaska, Georgia, Illinois, Iowa, Louisiana, Maine, Maryland, Massachusetts, Minnesota, Mississippi, Missouri, Nebraska, New Jersey, North Carolina, North Dakota, Rhode Island, and South Dakota.)

In the budget it sent to Congress in February, the Administration proposed that additional funds be made available to help fill the shortfalls in the coming year.[9] Congress, however, has not acted to avert the impending shortfall. If it does not do so before fiscal year 2007 begins, the number of uninsured children could rise substantially, and several years of gains in children’s coverage could be reversed.

Medicaid enrollment among children also could decline in the coming year because of changes enacted earlier in 2006 as part of federal budget-cutting legislation (the Deficit Reduction Act enacted in February). In particular, one provision of that legislation requires U.S. citizens who are enrolled in, or applying for, Medicaid to document their citizenship by producing documents such as birth certificates or passports. Analyses based on a national representative survey suggest that one to two million U.S. citizens covered by Medicaid, including poor children, pregnant women and mothers, could have their coverage delayed or denied because they do not have these documents readily available.[10] This new requirement is just beginning to be implemented by states and its impact is not yet known.

[2] Based on analyses of Current Population Survey data by the Center on Budget and Policy Priorities.

[7] Donna Cohen Ross and Laura Cox, “In a Time of Growing Need: State Choices Influence Health Coverage Access for Children and Families,” Kaiser Commission on Medicaid and the Uninsured, October. 2005.

[8] Matt Broaddus and Edwin Park, “SCHIP Financing Update: In 2007, 17 States Will Face Federal Funding Shortfalls of $800 Million in Their SCHIP Programs,” Center on Budget and Policy Priorities, June 5, 2006. CRS estimates $944 million in federal shortfalls in fiscal year 2007 (Testimony of Chris Peterson, Congressional Research Service, to the Senate Finance Health Subcommittee, July 25, 2006). The U.S. Department of Health and Human Services estimates $906 million in shortfalls in 2007 (Testimony of Mark McClellan, Centers for Medicare and Medicaid Services, HHS, to the Senate Finance Health Subcommittee, July 25, 2006). Neither CRS nor CMS estimated the number of children who might be affected.

[9] The Administrations proposal would accelerate the redistribution of SCHIP funds from states with unused funds to states with shortfalls. Alternatively, Congress could appropriate the additional SCHIP funding needed to avert shortfalls in fiscal year 2007, as it did for fiscal your 2006.

[10] Leighton Ku, “Revised Medicaid Documentation Requirement Jeopardizes Coverage for 1 to 2 Million Citizens,” Center on Budget and Policy Priorities, July 13, 2006. This assumes that states implement strategies such as data matching to ease the burden of this provision on Medicaid beneficiaries. 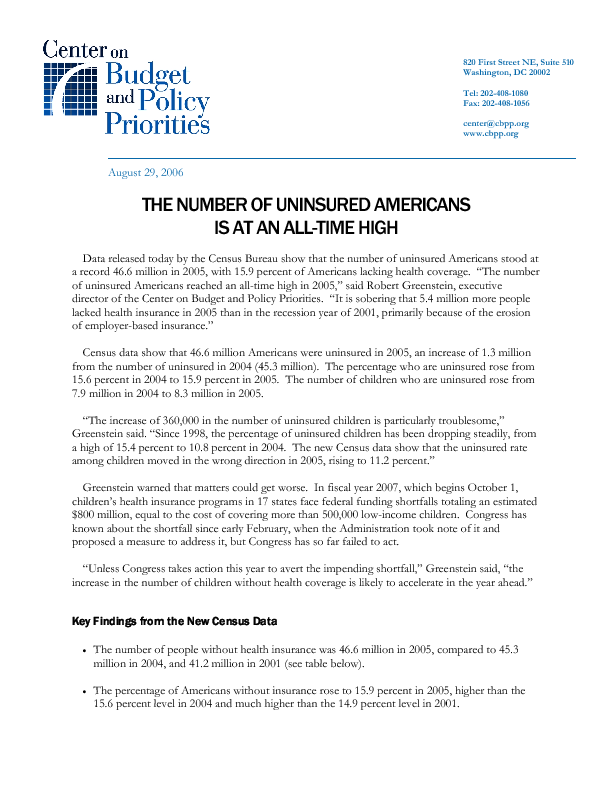