The Food Stamp Program is Growing to Meet Need

The Food Stamp Program is the cornerstone of the nation’s nutrition assistance programs.  This year the program is providing over 25 million participants in more than 11 million low-income households with debit cards they can use to purchase food each month.  Because eligibility is not restricted to specific subgroups of people, the Food Stamp Program serves a wide range of low-income households, including families with children, elderly people, and people with disabilities.  About 80 percent of food stamp recipients live in households with children.  Nearly one-third of recipients are seniors or people with disabilities.

The number of people in households that receive food stamps has grown from 17.2 million in 2000 to 25.7 million in 2005, and is projected to increase to almost 27 million in 2006.[1]  Some have asked why food stamp participation has risen since 2000 and has continued to rise in recent years when the economy is relatively strong overall and the unemployment rate has held at around 5 percent.

As discussed below, the reasons reflect both the failure of the economic recovery to extend to the poorest Americans and improvement in the ability of the Food Stamp Program to meet the need that is there.

The Food Stamp Program Responds to Swings in the Economy

The Economic Recovery Has Not Extended to Low-income Americans

Food stamp participation continued to rise after the overall unemployment numbers began to improve in 2004, in part because the gains from the economic recovery have not been strong among low-income working families.[2]

During the current economic recovery, the number and percentage of Americans living in poverty has remained high; in fact, poverty has risen now for four straight years (2001-2004).  In 2004, the most recent year for which Census data on income and poverty are available, 37 million people were poor, an increase of 17 percent since 2000.  The number of Americans living in deep poverty — with family income below half of the poverty line — rose even faster, by 24 percent from 2000 to 2004.  In no other economic recovery of the past 45 years did poverty increase between the second and third full years of the recovery. 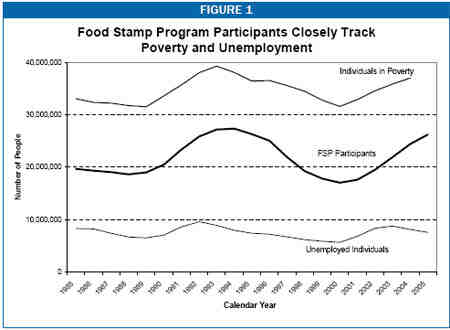 Poverty has persisted during this recovery in part because the recovery has not increased real earnings at the lower end of the income distribution.  During the current recovery, real wages and salaries have grown at less than half their average annual rate in other recoveries since the end of World War II.  Real median wages for the bottom one-fifth of full-time workers fell in 2003, 2004, and 2005.  This also is the only recovery in the past 45 years in which the income of the typical household did not grow between the second and third years of the recovery.

Food insecurity, as well, has continued to grow in recent years.  According to USDA, some 38 million Americans lived in households that were “food insecure” in 2004, meaning they had difficulty affording food.[3]  The number of individuals facing food insecurity increased by almost two million people between 2003 and 2004 and has increased by more than 6 million people since 1999.  In 2004, more than one in ten American adults — and nearly one in five American children — lived in food-insecure households.

Thus, despite relatively low overall unemployment in recent years, the need for food stamps has continued to rise.

The Food Stamp Program is Reaching More People; But Many who are Eligible Still do not Participate

USDA’s most recent studies find that the Food Stamp Program is reaching more low-income households.  First, more low-income households are eligible for food stamps because of the increases in the number of poor people discussed above, the provisions of the 2002 farm bill that restored food stamp eligibility for some legal immigrants,[4] and new state options that have allowed states to provide food stamps to households that own a reliable car. [5]  In the past, restrictive rules about car ownership were a barrier for food stamp participation among working-poor families.

In addition, the share of eligible low-income households that participate in food stamps has increased modestly in recent years, in part because of improvements and simplifications in the program enacted in 2002 that retooled the program to serve low-wage working families more effectively.

It is important to note that the increase in food stamp participation represents a recovery from the partial collapse in food stamp participation in the late-1990s, when the number of people receiving food stamps plummeted from 26.6 million in 1995 to 17.3 million in 2001 (see the chart on page 2).  USDA studies have shown that the decline in participation rates during this time occurred in part as a result of serious initial problems in adapting the Food Stamp Program to the sweeping changes being made in the welfare system after the 1996 welfare law.

USDA, Congress, and States Are Committed to Serving all Eligible Households

The USDA, Congress, and states have made it a priority to improve participation in the Food Stamp Program among eligible households.  USDA annually awards performance bonuses to states with the highest and most improved program access rates.  A key performance goal for the Food and Nutrition Service (FNS), the USDA agency that administers the program, is to raise food stamp participation rates from 56 percent to 63 percent by 2007.

In recent testimony before the House Appropriations Committee, Eric Bost, the USDA Under Secretary for Food, Nutrition, and Consumer Services, reiterated the agency’s commitment to encourage all who are eligible and in need to participate in the program,” and, “to aggressively promote the message that Food Stamps Make America Stronger, in the sense that the program puts healthy food on the tables of low-income families and has a positive effect on local economies.”

The Food Stamp Program Fills a Critical Need after Disasters

Using the Food Stamp Program’s flexible disaster authority, USDA was able to quickly and efficiently provide over $900 million of food stamps to about 4 million individuals in 2 million households in the aftermath of hurricanes Katrina, Rita and Wilma.  The number of individuals receiving food stamps went from 25.8 million in August 2005 to 29.6 million in November, following the hurricanes.  Then by February 2006, participation fell back almost to pre-hurricane levels (26.0 million).

Because the Food Stamp Program has a rigorous Quality Control system, it is clear that erroneous eligibility decisions resulting in payment to ineligible people are not a cause of rising participation.  To the contrary, efforts by USDA and the states have greatly reduced food stamp payment errors.  USDA reports that fewer than two percent of food stamp benefits are issued to households that do not meet all of the program’s eligibility requirements.  Rates of both erroneous “overpayments” and “underpayments” have plummeted for seven years, setting record lows.

The net loss to the federal government (i.e., the benefits lost through overpayments minus those saved by underpayments) is three percent.  The food stamp error rate compares quite favorably to error rates for most other government programs for which data are available.  For example, the Internal Revenue Service estimates that federal taxes were underpaid by 16 percent in 2001.[7]

The number of people who receive food stamps has increased dramatically since 2000.  This increase is not cause for alarm, but rather is due to:

Despite the increase in food stamp participation, the program reaches only 60 percent of eligible individuals.  States, advocacy groups, and USDA remain committed to reaching out to eligible non-participants to help them become aware of food assistance benefits that could help them afford a nutritionally adequate diet.

[1] Both USDA and the Congressional Budget Office project that 26.9 million people will participate in the Food Stamp Program in an average month in fiscal year 2006.

[3] More technically, “food insecure” households are households that at times are uncertain of having, or unable to acquire, enough food for all household members because they have insufficient money and other resources for food.  Household Food Security in the United States, 2004, by Mark Nord, Margaret Andrews, and Steven Carlson, Economic Research Report No. (ERR11), October 2005, available at http://www.ers.usda.gov/Publications/err11/.

[4] Undocumented immigrants are not eligible for food stamps.  The Congressional Budget Office (CBO) estimated in 2002 that the farm bill’s restoration of food stamp benefits to some legal immigrants would increase food stamp participation by a little less than 400,000 people in an average month.

[5] USDA estimated that legislation enacted in 2000 that provided states an option to ease outdated asset rules relating to vehicles would increase food stamp participation by about 240,000 people in an average month.