Federal housing assistance programs for low-income families face growing budget challenges.  Housing costs have grown faster than most families’ incomes in recent years, and a growing number of low-income families — including many working-poorfamilies — face housing costs that are unaffordably high.  Yet even as the need for low-income housing assistance has grown, the emergence of large budget deficits is creating growing pressure for significant cuts in domestic programs, including low-income housing programs.  Indeed, funding cuts have already contributed to the loss of more than 150,000 Section 8 housing vouchers and weakened efforts to rejuvenate and preserve the nation’s supply of public and private assisted housing for low-income families.

Unfortunately, budget deficits are expected to persist over the next ten years and then — driven primarily by rising health care costs, the aging of the population, and recent tax cuts — to grow larger in succeeding decades.  The magnitude of the projected deficits and their probable economic impact are sufficiently great that Congress will be forced sooner or later to take major corrective action.

This raises a critical question:  what type of actions will policymakers take to address the large budget shortfalls?  Unless policymakers address the shortfalls in a responsible, balanced manner that puts all parts of the budget (including taxes) on the table, deep cuts ultimately may be made in key safety-net programs for poor families, including low-income housing assistance programs.  Housing affordability problems could worsen sharply as a consequence.

This paper explores these issues.  It examines the implications of the mounting federal budget squeeze on the three largest federal sources of housing assistance for low-income families.  It finds that: 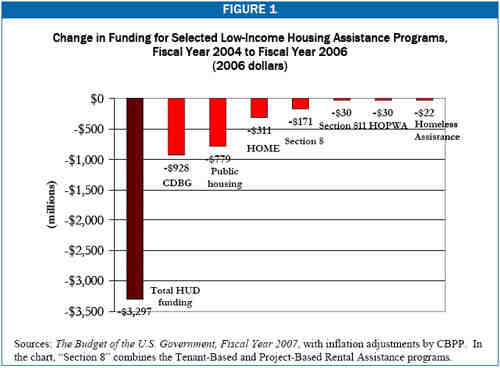 Meeting the housing needs of low-income families in the face of the long-term fiscal problems the nation faces will be a challenging task.  Doing so will require placing all of the budget — including tax cuts, special-interest tax breaks, and various spending programs that are protected by powerful constituencies — on the table, and reaching bipartisan agreement on a balanced mix of reductions in projected spending and increases in revenues.  Doing so also will require adherence to a principle espoused by David Stockman, President Reagan’s first budget director, in the 1980s:  Mr. Stockman said that when seeking to reduce the deficit, policymakers should go after “weak claims” that have been made on the federal Treasury, including weak claims made by powerful interests and constituencies, rather than politically “weak clients.”  Those who are weak politically include the low-income families assisted by the federal housing programs.

A balanced approach to deficit reduction is not foreign to American political culture.  It was successfully followed in the first half of the 1990s, for example.  The landmark deficit-reduction packages enacted in 1990 and 1993 each contained a mix of spending reductions and tax increases.  Moreover, those measures packaged spending reductions and revenue-raising measures together with increases in key anti-poverty initiatives.  The result was legislation that reduced deficits and poverty at the same time.  (The 1990 and 1993 legislation demonstrated that when all of the budget is put on the table, it is possible to secure sufficient savings to achieve large-scale deficit reduction, while reinvesting a portion of the savings in policies to reduce poverty.)

This model needs to be followed in the future as well.  Those who are concerned with equity in our society and with the needs of low-income families in areas such as housing and health care will need to be involved in efforts to bring this about.

Click here to read the full-text PDF of this report (44pp.)

[2] See Appendix B for more detailed information and sources.

[3] The term “cost of legislation” refers to the cost of tax and spending bills as estimated by the Congressional Budget Office and the Congressional Joint Committee on Taxation, relative to the budget baseline.

[4] In addition, the President had proposed additional cuts in funding for HUD programs in 2007.  As this paper goes to press, Congress is considering final legislation to fund HUD and most other federal agencies for 2007.  Indications are that Congress will provide substantial increases in funding for Section 8 and public housing, though most other HUD programs will be funded at 2006 levels – and below those levels, once inflation is taken into account.