Madam Chair, Vice Chair, and Members of the Committee, thank you for the opportunity to testify here today.

My name is Phil Oliff. I am a Policy Analyst with the Center on Budget and Policy Priorities. The Center is a nonpartisan, nonprofit organization that conducts research and analysis to help shape public debates over proposed budget and tax policies and to help ensure that policymakers consider the needs of low-income families and individuals in these debates.

I am here today to testify in support of House Bill 331, which would increase the refundable portion of Maryland's Earned Income Tax Credit (EITC) from 25 to 30 percent of the federal EITC. The federal EITC, upon which Maryland's credit is based was established in 1975 and has been expanded several times through a bipartisan effort to make work pay for low income families. The credit is widely recognized as the nation's most effective anti-poverty program for working families. In 2009 alone it lifted 6.5 million working families, including 3.3 million children, out of poverty. That year 405,768 Maryland families and individuals received the federal EITC.

In 1987 Maryland became the first state in the country to enact a state EITC modeled on the federal credit. Since that time, 23 additional states and the District of Columbia have created their own EITCs.

Increasing Maryland's EITC would help to assure that, in raising the revenue needed to sustain key state services like transportation, the state does not tax low-income families closer to the poverty line or deeper into poverty. This concern merits special attention for three interrelated reasons:

First, the state is considering a number of revenue measures that would disproportionately affect the state's lowest-income residents. I am thinking particularly of Governor O'Malley's proposals to extend the state's sales tax to gasoline, increase the state's flush tax, and increase electricity rates to subsidize an offshore wind farm.

Lower-income families spend a larger share of their income on gasoline than higher-income residents. Thus, applying the sales tax to gasoline would take an especially large bite out of the incomes of low-income residents. The flush tax increase and the electricity rate increase would levy the same fee on all taxpayers, regardless of income, and so would absorb a larger share of the incomes of lower-income taxpayers.

Our analysis of these revenue proposals illustrates their regressive impact. We estimate that when the gas tax increase is fully phased in, these measures combined would:

These calculations assume that these families spend the same amount on gasoline as the national average for households within a similar income range. 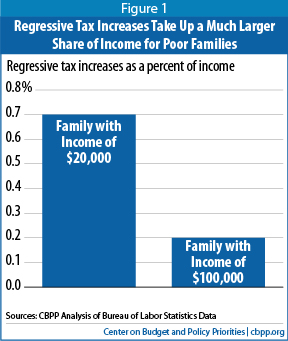 Third the weak economy leaves the state's lowest income residents especially vulnerable to a loss of income. Poverty has surged since the start of the recession. Between 2007 and 2010 the number of people living in poverty in Maryland grew by over 104,000, or 23 percent. Many families have seen their incomes fall towards the poverty line after a family member lost a job or had their working hours scaled back. Maryland should not increase hardship even further by raising revenues in a way that makes it even more difficult for low-income families to make ends meet. An additional $147 a year in increased taxes and fees might not seem like a lot of money, but it can make a big difference to a low income family struggling to meet basic needs.

Fortunately, Maryland can shield low income working families from the impact of regressive tax increases with a modest increase in the state's EITC. To that end I urge your support of House Bill 331.