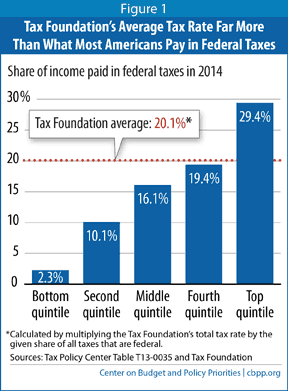 In a progressive tax system like that of the United States, only upper-income households on average pay federal tax at rates that are equal to or above federal revenues as a share of the economy.  Estimates from the nonpartisan Urban-Brookings Tax Policy Center show that low- and middle-income households (about 80 percent of all households) will pay a smaller share of their income in federal taxes this year than the Tax Foundation’s average tax rate.

The Tax Foundation acknowledges this issue in a methodology paper accompanying its report, noting that its estimates reflect the “average tax burden for the economy as a whole, rather than for specific subgroups of taxpayers.”[2]  Consequently, those who report on Tax Freedom Day as if it represents the day until which the typical American must work to pay his or her taxes are misinterpreting these figures and inadvertently fostering misimpressions about the taxes that most Americans pay.

Moreover, the Tax Foundation suggests that people spend part of the year working for the government and part of it working for themselves, becoming “free” only when they get to work for themselves.  In reality, taxes pay for services that benefit us every day and are central to our idea of freedom.  Few Americans would likely feel more “free” if Tax Freedom Day came earlier in the year because the federal government stopped providing for national security, ensuring homeland security, conducting food safety inspections, or testing prescription drugs.

The Tax Foundation estimates that in 2014, the federal effective tax rate will be 20.1 percent.  But as Figure 1 shows, the nonpartisan Urban-Brookings Tax Policy Center (TPC) estimates that households in each of the bottom four quintiles of the income scale will on average pay less than 20.1 percent of their income in federal taxes in 2014.[4]  Only households in the top quintile will face, on average, a higher rate.[5]  The TPC estimates suggest that roughly 80 percent of U.S. households pay a smaller share of their incomes in federal taxes than the overall federal effective tax rate.[6]

Data from the Congressional Budget Office (CBO, Congress’ official scorekeeper) paint a very similar picture to the TPC estimates.  The CBO data, based on actual tax returns, are available through 2010.  In 2010, the Tax Foundation’s Tax Freedom Day materials suggested that the average federal tax rate was 17.2 percent, but CBO data for 2010 suggest that more than 80 percent of U.S. households paid less than 17.2 percent of their incomes in federal taxes that year.[7]

For example, in 2006, the Wall Street Journal wrote, “The Tax Foundation reports that the average American works 116 days of the year to pay their tax bill (emphasis added).”[8]  In 2011, CNNMoney reported that, “Americans will spend an average of 28% of their income to pay federal, state and local taxes this year . . . That means you will need to work 102 days — more than three months — just to earn enough to pay your tax bill.  So on April 12 you will be free of your 2011 tax burden.”[9]

Already in 2014, DailyFinancewrote an article titled “3 Months Into 2014, You’re Likely Still Working for the Tax Man,” which describes Tax Freedom Day as “how many working days it takes for the average American worker to earn enough to pay all his federal, state and local taxes…”[10]  Most people reading these articles would likely assume that the figures cited apply to the average or typical family.  Yet that is not the case.

The Tax Foundation’s proclamations of state Tax Freedom Days are meaningless because the report’s state-by-state estimates are flawed.  They are not useful for discussing the level of taxes paid by typical households or for assessing the tax choices made by a given state’s policymakers, for at least four reasons.

For all these reasons, the Tax Foundation’s proclamations of state Tax Freedom Days are misleading and do little to inform legitimate debates over state and local taxes and the services they support.

The Tax Foundation also presents an alternative “deficit-inclusive” Tax Freedom Day, which it measures by calculating total federal, state, and local tax receipts plus the federal budget deficit as a share of total national income.  This measure is also highly misleading.  It implies that each year’s deficit can simply be added on to the amount that taxpayers pay in taxes that year as a representation of the burden of government.  But that is not the case.

When the federal government runs a deficit in a given year, the obligation to pay off the debt  incurred in that year is spread out over many future years — years in which the total income of the nation will surely be higher than today.  By adding the amount of the deficit to current taxes and measuring them relative to current incomes, the Tax Foundation seriously overstates the actual tax level today.

The effect of deficits on the long-term budget outlook and future generations is a legitimate source of concern and deserves serious consideration.  But the budgetary well-being of future generations requires the debt to decline as a share of the nation’s income when economic times are normal — not to balance the budget in every year, as the Tax Foundation approach would imply.[11]

The Tax Freedom Day concept also suffers from a deeper flaw.  It suggests that the year can be divided into days that Americans spend working to pay federal, state, and local taxes and days they spend working for themselves so they can pay for goods such as food, clothing, housing, transportation, and medical care.  Yet taxpayers derive substantial benefits from the taxes that they pay.

[11] See Richard Kogan and William Chen, “Projected Ten-Year Deficits Have Shrunk by Nearly $5 Trillion Since 2010, Mostly Due to Legislative Changes, Recent Spending Cuts Outweigh Tax Increases 3 to 1,” Center on Budget and Policy Priorities, March 19, 2014, http://www.cbpp.org/cms/index.cfm?fa=view&id=4106; and Joel Friedman and Robert Greenstein, “Commentary:  Why Balancing the Budget by the End of the Decade Is Not the Right Goal,” Center on Budget and Policy Priorities, March 20, 2013, http://www.cbpp.org/cms/?fa=view&id=3935. 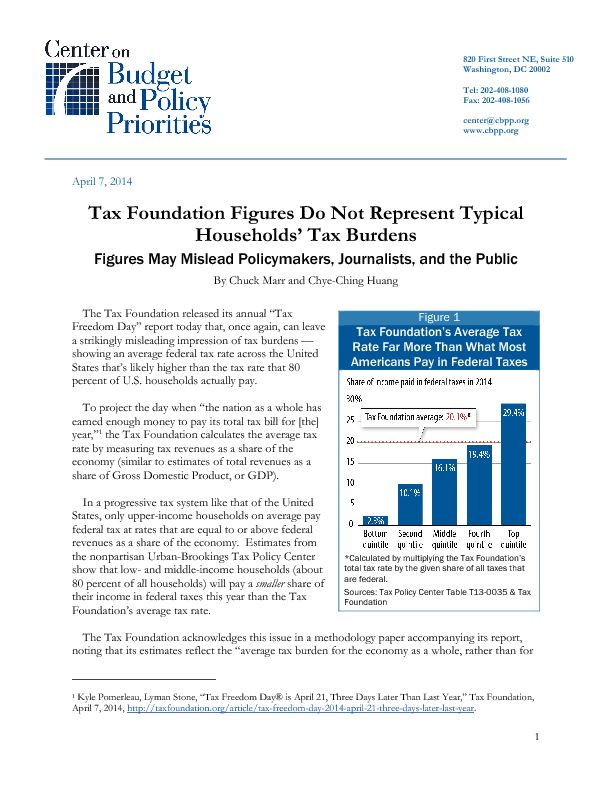