On September 20 the House passed a bill (H.R. 4844) that would, starting in 2010, effectively deny the vote to any U.S. citizen who cannot produce a passport or birth certificate (or proof of naturalization).  Although the bill’s supporters present it as a measure intended to prevent non-citizens from voting, the bill’s main impact will be on U.S. citizens themselves.  A national survey finds that approximately 11 million native-born citizens currently lack the required documents.  A substantial number could have difficulty obtaining or affording them.

The national survey, conducted in January 2006 by Opinion Research Corporation and sponsored by the Center on Budget and Policy Priorities, also indicates that the bill would affect certain groups disproportionately (see Figures 1 and 2) — including people with low incomes, African Americans, the elderly, people without a high school diploma, rural residents, and residents of the South and Midwest.  Substantial numbers of these and other citizens could potentially be disenfranchised by the bill. 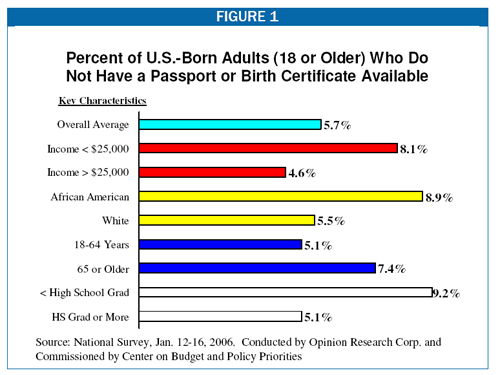 Under current rules, U.S. citizens who are registered voters can demonstrate their identity by producing one of several kinds of documents, including a photo ID, a current utility bill, or a current bank statement.  (Non-citizens are not permitted to vote in federal elections.)  The new House bill, in contrast, would require all U.S. citizens who have completed the voter registration process to present a photo ID in order to vote in federal elections in 2008.  Then, starting in the 2010 elections, all voters would be required to present a photo ID that proves the voter is a U.S. citizen.  Persons who vote by mail would have to mail in a copy of the required documentation along with their completed ballot.

A U.S. passport would satisfy both the 2008 and 2010 requirements, but as explained below, large numbers of U.S. citizens do not have a current passport.  The kinds of driver’s licenses (or other state identification documents) currently issued by states would satisfy the 2008 requirement but not the 2010 one, since states do not currently require proof of citizenship in order to obtain a license and do not denote citizenship on the license.

In January 2006, the Opinion Research Corporation conducted a nationally representative telephone survey of 2,026 adults, commissioned by the Center, to determine how many U.S.-born adult citizens do not have a passport or birth certificate readily available.[2]  (The Center commissioned the poll in response to a proposal, since enacted as part of the Deficit Reduction Act of 2005, to require U.S. citizens applying for Medicaid or renewing their Medicaid coverage to document their citizenship.)  Key findings based on the poll include:

The effect, if not the intent, of the House bill would be to make it more difficult for millions of eligible U.S. citizens to vote, and most likely to disenfranchise a significant number of these citizens.  The bill would be especially hard on certain already vulnerable groups, such as individuals who are elderly or have low incomes.  (It can cost $5 to $23 to get a birth certificate, while a passport costs $87 to $97.)  In addition, in the case of many elderly African Americans, the bill would likely reinforce previous racial discrimination that prevented some of them from having birth certificates in the first place.  For these reasons, the bill likely would do more to weaken Americans’ voting rights than to protect them.

[2] The poll asked two yes/no questions:  “Were you born in the United States?” and “Do you currently have a U.S. birth certificate or a valid U.S. passport in your home?”  Fewer than one percent of respondents did not know or did not answer whether they had these documents; these people are excluded from the analysis.

[3] We obtained this figure by multiplying the percentage of respondents without a birth certificate or passport (5.7%) by the total number of U.S.-born adults, as listed in the March 2006 U.S. Current Population Survey.  To estimate the number of people in various sub-groups without the needed documents, we adjusted the Census data accordingly.