On May 21, the Center on Budget and Policy Priorities released a report, “Hidden Consequences: Lessons from Massachusetts for States Considering a Property Tax Cap.”   The same day, Thomas Suozzi, the Chairman of New York’s Property Tax Relief Commission, issued a statement disputing aspects of the report and its relevance to New York.  The chairman’s statement missed some of the key points of the report.

New York’s Property Tax Relief Commission is expected to propose a cap on property taxes for education, and is expected to point to the Massachusetts Proposition 2 ½ property tax cap as evidence that a cap would be good for New York.  In his statement, Mr. Suozzi cites per pupil spending in Massachusetts as well as educational attainment in Massachusetts as evidence that Proposition 2 ½ has not hurt education.  But in his own statement, he also identifies the massive infusions of state aid as a major reason the cap has not hurt education — a circumstance unlikely to be duplicated in New York.

A property tax cap won’t make New York’s student performance mirror Massachusetts. The Suozzi statement says, “The bottom line in education is student performance” and goes on to cite Massachusetts’ top ranking on 4th and 8th grade reading and math test scores.  It is important to look at the probable causes of that achievement, however, which are affected by different characteristics of the school population in Massachusetts and New York, and  — above all — by Massachusetts’ dedication to concentrating funding and effort to bringing up the achievement of low-income students.

The statement distorts the reality of property taxes in New York.  The Suozzi statement says that the current system is unfair to poorer communities and that property taxes are growing faster than people can afford 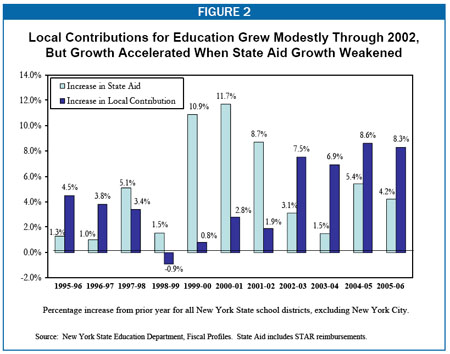 There are better ways to relieve property taxes.  There are a number of steps New York could take to relieve property taxes that do not call forth the adverse consequence of a cap that are detailed in the Center’s report.  These include two types of targeting — targeting school aid effectively to lower-income communities as Massachusetts has, and enacting a strong circuit breaker that protects low- and middle-income households when property taxes exceed a given percentage of their income.

In addition, New York could consider state actions that would help curb some of the reasons education expenditures tend to grow rapidly.  Health insurance expenditures are a major driver of cost growth; the state could create larger region-wide or state-wide insurance pools and use the bargaining power that comes from a larger insured group to hold down costs.  Consolidation of small school districts in urban and suburban areas could also create longer-term cost savings.

Caps cannot change the rapid rise of health insurance or fuel costs; they only cause inequities.  It is far better to address the reasons for cost increases and remedy those causes.