This slowdown in spending growth signifies a change in states’ fiscal conditions.  On average, state budgets’ growth rate has declined to a level roughly one percentage point below the average growth over the last few decades.  The 2008 level of 5.3 percent is likely to be a minimal amount needed to maintain current spending commitments.  Such expenditure growth in the range of 5 to 6 percent is necessary for state budgets just to maintain the status quo in the face of growing costs for health care, education and other services as well as changes in the number of school-age children, the elderly and other populations to which state services are of particular importance.  This rate typically leaves little room for major new initiatives. 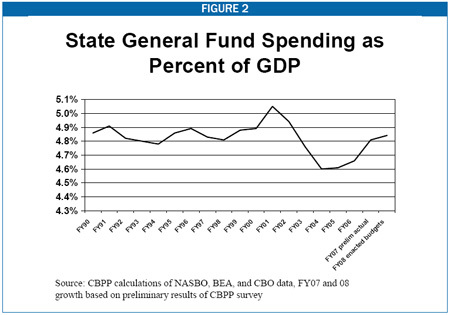 The slowdown in expenditure growth reflects in part policymakers’ recognition that state revenue growth appears to be slowing.  The Rockefeller Institute’s survey of state tax collections shows that tax revenues for the first three quarters of fiscal year 2007 averaged 4.6 percent above the previous year.  This was well below the growth rates for fiscal year 2006 (8.4 percent) and fiscal year 2005 (10.3 percent).  State sales taxes — one of states’ two major revenue sources — were especially weak in fiscal year 2007 and now constitute a much smaller share of GDP than they did in the mid-1990s.  This trend may foreshadow problems ahead for state budgets.  Should revenue growth continue to weaken, states will have increasing difficulty balancing their budgets in coming years.

Another reason state expenditure growth has slowed is a decline in state fund balances carried over from one budget year to the next.  To some extent, states’ recent expenditure growth depended on the use of one-time funds that resulted from conservative revenue estimates.  As the economy improved, states’ actual revenue collections exceeded their projections.  As a result many states ended their fiscal years with fund balances.  These balances could have been placed in a rainy day fund or otherwise been left unspent in order to provide a cushion to help states weather future economic downturns, natural disasters or other unexpected budget pressures that occur after budgets are adopted.  In many cases, however, states did not maintain these “reserves” but rather carried these funds over to the following budget year and then spent them as if they were ongoing revenues.  Although this practice is legitimate, it cannot be sustained once revenues stop exceeding projections and will be particularly problematic if a recession hits.

At the end of fiscal year 2006, state General Fund balances totaled about 11 percent of total state spending, roughly the same level of reserves states had on hand going into the last recession — and an amount that proved inadequate to avoid major spending cuts.  Most states’ rainy day funds are well below 15 percent of the state’s annual spending, the threshold that the Government Finance Officers Association suggests is prudent and that CBPP research suggests would be needed for a state to weather a recession.[1]  Despite this, these balances are projected to begin declining in fiscal year 2007 as states use part of their reserves to balance their budgets.

There are signs in specific states that fiscal problems may be imminent.  Just one month into the new fiscal year, reports of fiscal stress have begun to surface in some states:

It is too early to know whether states are headed into another downturn or whether revenue growth will pick up again.  But we do know that there are ways that states can avoid repeating the erratic pattern of expenditure growth of the last six years.   States can chart a more even course in the future if they plan on a multi-year horizon that takes expected spending and revenues into account.  This gives them time to adjust to upcoming problems and develop systematic plans to fund needed improvements in health care, education, transportation and other areas.