State Corporate Tax Shelters and the Need for “Combined Reporting”

Almost half the states with corporate income taxes have adopted combined reporting.  Five states have enacted the reform in the last three years, and several others have seriously considered doing so.  A major reason for states’ growing interest is their recognition of how badly corporate tax shelters that exploit the lack of combined reporting are eroding state corporate tax payments.  Corporations have devised a wide variety of strategies to artificially shift profits to out-of-state subsidiaries.  Combined reporting largely negates these strategies by enabling the state to tax a fair share of the profit shifted into a related, out-of-state corporation.

Three of the most common state corporate tax shelters rely on the creation of subsidiaries that are expressly or effectively exempt from corporate income taxes in the states in which they are formed. The types of subsidiaries are:

There are two basic ways in which corporations use these three kinds of subsidiaries to shelter corporate profits from state income taxation in states that do not have combined reporting:

A properly conceived and drafted combined reporting law would nullify such uses of these subsidiaries to avoid state income taxes. Combined reporting eliminates the tax benefit of artificially shifting income into one of these entities because it counts the subsidiary’s income in the calculation of the corporation’s total income, of which the state can then tax its appropriate share.

One of the most basic strategies corporations use to minimize their income tax liability is to “wall off” as much of the corporation’s profit as possible in a subsidiary that is not taxable in the state(s) where the subsidiary’s customers are located. This is known as “nexus isolation.” (“Nexus” is a legal term that means “engaging in sufficient activities in a state to become subject to a tax in that state.”)

Manufacturers are particularly well positioned to engage in nexus isolation. They can take advantage of a little-known federal law that sets a nexus threshold for state corporate income taxes. The law bars states from taxing the income of out-of-state corporations if the firms limit their activities within the state to “solicitation of orders.”

"When nexus is created by sales representatives performing repair and maintenance services in the state, one strategy would be to separately incorporate the sales division that operates in the state. This would prevent a nonunitary state [i.e., one without combined reporting] from taxing the profits attributable to the parent corporation’s out-of-state assets and activities..."

Combined-reporting states are much less vulnerable than other states to this form of corporate tax avoidance. Once a combined-reporting state has nexus over one subsidiary in a corporate group, the subsidiary must calculate its tax on the basis of the corporate group’s combined profit. This eliminates much of the tax savings from isolating profits in out-of-state subsidiaries, since those profits are added back into the taxable base of the in-state entity — of which the state then taxes its fair share.

Combined reporting also counters a related tax-avoidance strategy called “transfer pricing,” in which a parent corporation sells its products to an out-of-state subsidiary, which in turn sells them to the final customers. If the parent does no more than solicit orders from its own subsidiary, it is not taxable in the state in which the subsidiary is located. Moreover, the parent has substantial leeway to manipulate the prices (called “transfer prices”) at which it sells its products to the subsidiary in order to minimize its nationwide state corporate tax liability.

Some non-combined reporting states have tried to challenge the tax-avoidance strategies discussed above with ad hoc litigation based on general anti-tax-avoidance language in their statutes. Other states have enacted targeted legislation to close these shelters individually. Such approaches can be useful stop-gaps, but they are inferior to combined reporting for a number of reasons:

Click here to read the full-text PDF of this report (26pp.) 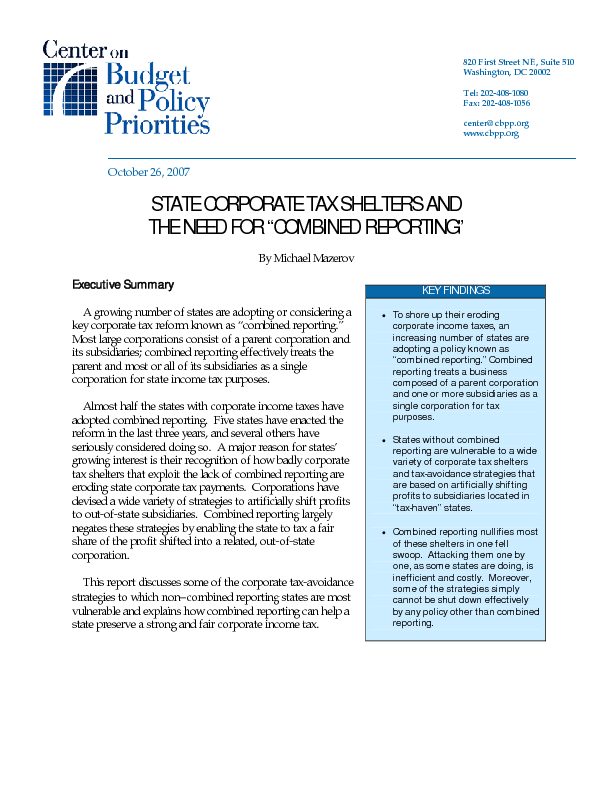