A vigorous debate is occurring about the meaning of these data.  The business community generally argues that firms are simply taking advantage of provisions of corporate income tax laws that state policymakers quite deliberately enacted, such as tax incentives for businesses that make major investments in the state.  And they argue that such incentives are an effective and wise use of state funds.

Policymakers and advocates concerned about the decline of the state corporate income tax disagree.  They say that businesses downplay the scope of the aggressive tax-sheltering strategies they employ.  And they argue that a large body of research suggests that corporate tax incentives are not very cost-effective at stimulating economic development.

This debate is unlikely to be resolved satisfactorily unless much more information about state corporate tax payments enters the public domain.  States can take a major step toward this goal by  mandating public disclosure of the amount of corporate income tax that specific corporations pay to specific states.

Such a change would:

In short, corporate tax disclosure would help illuminate the real-world outcomes of a state’s corporate tax laws and policies and facilitate reforms if needed.

Some corporate representatives and independent experts oppose company-specific disclosure.  Some have argued that it would force companies to release proprietary information that would provide an advantage to competitors that do not do business in the state.  However, a 1993 corporate tax disclosure study commission in Massachusetts rejected this claim; a large majority of the corporate financial experts it interviewed concluded that the information disclosed would be of little benefit to competitors.  One reason is that by the time such information would be released, it would often be too old to be of much use to competitors.

Critics have also warned that any state that mandated corporate tax disclosure would be branded as “anti-business.”  But such disclosure would help put all businesses in the state on a level playing-field by encouraging reforms that eliminate special advantages for corporations able to exploit tax loopholes.  Such changes would improve a state’s business climate, not worsen it.

In addition, it is sometimes claimed that tax disclosure is counterproductive to informed debate on state corporate tax policy because tax return information is too complex for the public to understand.  This claim ignores the fact that other types of information that are equally complex — such as corporate financial information filed with the federal Securities and Exchange Commission — are regularly made public.  For democracy to work, the public must be able to hold policymakers accountable for their decisions, and this cannot happen without the free flow of information.

Some have also argued that because corporate tax disclosure forms would include information from state corporate income tax returns, corporations would falsify information in their returns — and thus in their disclosure forms — in order to keep the information secret from competitors.  However, corporations face substantial penalties for noncompliance with state tax laws.  Moreover, the head of the Internal Revenue Service recently stated that “making corporate tax returns or a portion thereof public would likely improve [corporations’ tax] compliance.” (Emphasis added.)

Finally, opponents of state corporate tax disclosure sometimes assert that it is not an appropriate way to accomplish what they regard as its primary aim:  ensuring that existing corporate tax laws are fully enforced.  In reality, however, the aim of disclosure is not to evaluate the tax compliance of individual corporations (that is the job of state tax administrators), but rather to help policymakers and the public evaluate whether existing laws implement good corporate tax policy.

This report presents for consideration by state policymakers a “Model State Corporate Income Tax Disclosure Act.”  The Act, which could be enacted by a state legislature or (in states that permit this) through a ballot measure, would mandate company-specific corporate tax disclosure by all publicly traded corporations and their subsidiaries doing business in the state.  Its provisions seek to balance the public’s need for information related to critical tax policy issues against the need to minimize the burden of complying with the disclosure requirement and the possibility of placing some corporations at a disadvantage vis-à-vis their competitors.

Under the Model Act, corporations would have to file a form with the state’s secretary of state annually that would identify the corporation and provide selected information from its income tax return.  Such information would include the firm’s bottom-line tax payment and some of the major line-items that factor into this payment (such as the corporation’s “state taxable income” and its overall “apportionment factor,” which determines the share of the corporation’s nationwide profit that the state will tax).

The Model Act also includes a few special provisions to illuminate the impact of particular features of state corporate tax codes.  Corporations would be required, for example, to disclose payments of royalties and interest to entities that appear to be subsidiaries set up as tax shelters.  In addition, any corporation making sales in the state but not required to file an income tax return would have to file a disclosure form.  (One of the most frequent shortcomings of states’ corporate tax structures is their failure to require corporations making profitable sales to their residents to pay any tax at all.)

These disclosure forms would be available to the public upon request, and the information contained in them would be accessible through a searchable Internet database.  Public release would occur, however, with a time lag.  Release of disclosure forms and the database would be delayed 24 months beyond the tax year in question.  This safeguard would minimize the possibility that information that could be valuable to competitors would be disclosed.

Policymakers and interested citizens in numerous states will, it is hoped, use the information in this report to start a vigorous debate about the role that disclosure could play in revitalizing state corporate taxation.

Click here to read the full-text PDF of this report (69pp.) 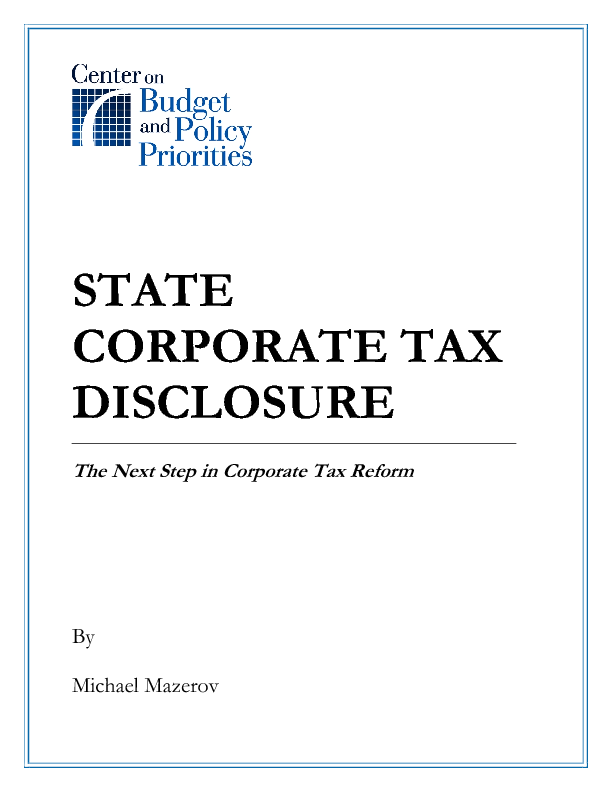