State Budgets: On the Edge?

States are in considerably better fiscal shape than they have been since 2001. State revenues have grown rapidly over the last year, in marked contrast to the sluggish growth or declines in revenues between 2001 and 2004. For many states, however, a return to budget deficits may not be long in coming. Fiscal conditions appear unstable in at least 24 states, and in 12 of these states — home to about one-third of the nation’s population — budget deficits had to be closed in Fiscal Year 2007 or are projected for later years. Many states risk a rapid return to deficits unless they recognize that some of their current “surplus” revenues are only temporary and thus should not be used to fund ongoing tax cuts or spending increases.

Some states that do not appear on this list may also face deficits beyond 2007. Many states do not project or publish estimates of future-year surpluses or deficits and it this is difficult to assess their long-term fiscal health.

The 24 states identified here have a variety of problems. Maryland, Michigan and New Jersey are feeling the effects of past tax reductions that have proven to be unaffordable, as well as a number of past years in which on-going expenditures or new programs were based on one-time or unsustainable revenue streams. California, Connecticut, Maryland, Oklahoma, Nebraska, New York, Texas, Washington and Wisconsin are using one-time funding sources or surpluses to fund ongoing tax cuts or expenditure increases, and so may find themselves in a similarly difficult fiscal position in the future. Arizona, Iowa, Michigan, Nebraska, New York, Ohio, Oklahoma and Rhode Island have enacted tax cuts that are being phased in over a number of years. While revenues are sufficient to balance the FY 2007 budget, problems are likely to develop when the state faces the full costs of the tax cuts in future years.

Connecticut, Illinois, New Jersey, and Oklahoma have used underfunding of state pension obligations as a way to balance operating budgets. These obligations ultimately have to be made whole, potentially creating holes in future budgets. Maryland a number of years ago passed a costly education reform that is phasing in without any revenue stream to support it. These and other fiscal problems of the 24 states are detailed below.

The budget surpluses states reported for FY2006 and FY2005 can give the misleading impression that a state’s fiscal health is strong — and that new tax cuts or expenditures are affordable — when this is not the case. Mid-year surpluses occur when revenues come in stronger than the state estimated when the budget was enacted; the presence of a surplus does not mean that a state has an ongoing revenue stream that exceeds funding needs. When such one-time surpluses are used to fund core budgets, or used to justify expenditure increases or tax cuts, states generally are creating deficits in future years.

These current and projected deficits, and the budget actions that could endanger future fiscal health, come against the backdrop of many states that have never fully recovered from the recent fiscal crisis. State expenditures fell substantially relative to the economy during the recession, and they still have not been restored; expenditures remain below their average during the 1990s. (See Figure 1.) In over half the states, general fund spending for FY 2007 — five years into the economic recovery — remains below pre-recession levels as a share of GDP. A significant portion of state reductions in education funding, higher education, health coverage, and child care that were made during the downturn have remained in effect. There is a need in a number of states for restorations of these important public services and programs — arguably before states contemplate further tax reductions — but it is important that the restorations take place in a fiscally responsible and sustainable manner. 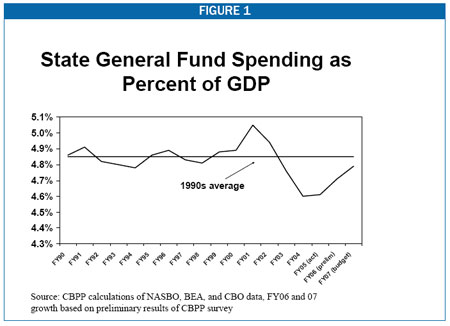 States’ Actions Will Determine How Soon Their Fiscal Health Is Restored

Some factors that are endangering states’ fiscal health — such as local economic doldrums or reduced federal assistance — are out of the control of state policymakers. But state policy influences many aspects of state fiscal conditions.

A recent survey of legislative fiscal directors confirms the uncertainty of the future fiscal health of the states. In March 2006, the National Conference of State Legislatures surveyed state legislative fiscal offices. As part of this survey they asked if the state was projecting a gap between ongoing revenues and ongoing spending in the near future. This survey found that almost half the states estimate that available revenues will fall short of projected expenditures in one or more of those years — FY2007, FY2008 or FY2009. a (Of the remaining states, nine states do not prepare out-year projections or did not respond while some 18 states reported that they do not expect gaps in FY2008 or FY2009.) a State Budget Update, March 2006, National Conference of State Legislatures, April 2006

The remainder of this paper discusses the fiscal health of the 23 states in more detail. These descriptions illustrate the impact of state actions on their future fiscal health.